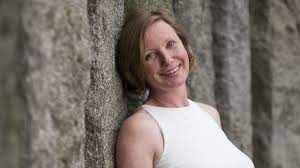 The heroine in Ciara Geraghty’s latest novel prefers figures to people; order is essential to Marianne Cross. So when she loses her job, her house and her marriage, and has to return to her shambolic childhood home, she’s utterly distraught. She couldn’t be less like her mother; an artist with bohemian tendencies, who is a recovering alcoholic. How will Marianne cope?

When Ciara planned this eighth novel, Make Yourself at Home, she can’t have known that with Covid 19, the throwing together of fractious families would hold such resonance for so many people.

“I’m not a prophet,” she says, on zoom from her home in Donabate, North County Dublin. “I obviously knew nothing about the pandemic when I wrote the novel, but it’s so coincidental.”

The idea started with the characters of Marianne and her Mum Rita.

“I was interested in the idea of the provident child of improvident parents,” she says. “If you have a free-spirited couple who do not exert discipline, what kind of child do they raise? In my novel it’s Marianne, who is the antithesis of everything that Rita holds dear.

“Society holds mothers more to account than fathers and I wanted to explore that. Marianne thinks Rita was a bad mother, but is there any way to resolve that? Can Marianne learn to forgive Rita?”

A stellar storyteller, Ciara’s novels, although humorous, generally explore dark issues. Her last one, Rules of the Road featured the dual themes of assisted suicide and Alzheimer’s disease. The character of Eugene was inspired by her father, who suffered from dementia for thirteen years.

He has died since the publication of Rules of the Road, and, struggling with grief, Ciara wanted to write a joyful book, that would make people laugh out loud.

“I enjoyed writing it,” she says. “It’s all about the characters and the setting and the colour – I hope readers will enjoy it, and that it will help them escape from the world.”

Rita lives in a shambolic house on a cliff in North Dublin, with ‘Aunt Pearl,’ and a menagerie of animals. Eschewing Alcoholics Anonymous, she heads up an alternative support group – inviting them to her house for daily meetings. Marianne is horrified when she first meets The Get Well Sooners; a disparate group of former addicts, but will familiarity soften her attitude towards them?

Food plays a large part in this novel. A keen baker, Rita loved baking for the Get-Well Sooners. The novel even contains recipes for lemon melts, and flourless brownies. Is Ciara a good cook?

“No!” she says, laughing.  “My sister Niamh is a wonderful cook and baker. I eat her food. Does that count?”

Ciara had submitted the manuscript by the time Ireland went into lockdown.

“That was good,” she says. “With the book finished, I had to do line edits, copy edits and proof reading. It’s all lovely work, because you don’t really have to engage your creative brain.”

So lockdown wasn’t too bad?

“In a way, nothing changed,” she says. “I’ve been locked down for years because of my career choice. I write in my house. I work from home. But I’m used to having the house to myself. I love that, and now, of course everyone has joined me. I do feel that slight resentment.”

Ciara lives with her husband, Frank – two of her three children – her elder daughter has moved out – and a dog. And that can get noisy.

“And noise is the worst thing for me,” she says. “I need silence. I can’t write with music or the radio. I can close the attic door, but I know when I come out it won’t be to the peaceful space I have known.”

“I thought, with the pandemic, this novel wouldn’t be as easy as the other books. I had to give myself a talking to and say, ‘Come on. Stop wallowing. Get on with it! And I do realise we are lucky.

“Frank and I are now kind of ok with the lockdown,” she says. “I’ve reached the stage of life where I’m happy to sit in at night, reading, listening to podcasts and watching Netflix. It’s the young people I feel sorry for.

“Neil is 19, and at college, and he’s managing okay. He does college on zoom; he drives and has a part-time job and has zoom parties with his friends. He, and I think most young people are being really responsible; they are leading by example. I know if I was 19, I would not be behaving as well. I would be sneaking out and doing all sorts!!”

“She is missing out on so much,” says Ciara. “She moved from her all-girls primary school, without all the end of school celebrations, and now has to learn how to be with boys. She needs to learn about socialisation.  It’s so tough.”

What does Ciara miss most about ‘normal’ life?

“I love hopping on a train,” she says. “I adore that, in 20 minutes I can be in the thick of things in Dublin City – wandering around and absorbing life!” She pauses. “I do worry about my creative life. I generally take myself off to do research. My new novel is set in an old-fashioned café in Cabra. In normal times I would take a coffee and walk around listening to people and seeing geographically where they live. I miss doing that. I can google the area but it’s not the same.”

“We wrote one about the Dunnes Stores Strikers written as 4 one-hour episodes. We acted it out as a play at the Five Lamps Arts Festival in Dublin. That was fun! Nell McCafferty came to see us – it was one of my proudest moments.”

The duo are now at the research stage of a screenplay on the second wave of feminism in Ireland.

“I really enjoy creating characters and pushing them around the page,” she says. “I ask them bizarre questions like, ‘would you go to the cinema alone?’ and ‘What’s in your fridge?’ I’m trying to get into their heads, and sometimes that takes a long time.”

Plot, she says, is less important.

“If I’ve got a character right and it’s authentic, it doesn’t really matter what the plot is. As long as the reader believes in the character.”

Ciara is in awe of the young Irish writers like Sally Rooney and Naoise Dolan.

“They make me feel inadequate,” she says. “There are so many of them, but I’m proud of them. They make me proud to be an Irish writer.”

As to genre – Ciara doesn’t like defining her books.

“That’s the responsibility of publishers, booksellers and journalists,” she says, rather sharply. “What I try and do is write books that are stories about families. I believe in a good tale well told. That’s my mantra. That’s my job and what I do. I’m a storyteller.”

Published in the Irish Examiner on 27th March.