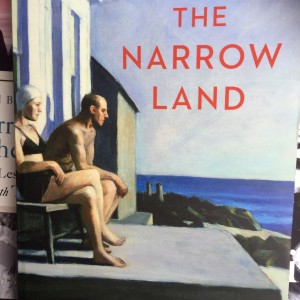 Reading The Narrow Land – a novel set in post-war Cape Cod – is like experiencing the work of Scott F. Fitzgerald. There’s that same atmospheric sense of long hot summers, with people extracting as much pleasure as they can. That it’s written by an Irish writer – and one famous for such authentic Dublin books as Tatty and The Cold Eye of Heaven seems quite extraordinary.

Moreover, there’s much more to this stunning eighth novel from Christine Dwyer Hickey. She’s taken the real-life artists Edward and Jo Hopper, and, alongside her examination of their marriage, and their neighbour’s extended family dynamics, she’s introduced Michael, a young refugee from Germany. We see much of the action through his bemused eyes, and his perspective feels utterly authentic. But then, voice has always been Christine’s strength.

“I like to make things as realistic and true as I possibly can,” she says, when we meet in Dublin on an unseasonably glorious February day. “One of my earliest influences was Bloom from Ulysses, and Woolf’s Mrs Dalloway. When Mrs Dalloway walks through London you see only what she sees and it’s the same with Bloom and Dublin. If you do that – if you find a location and act your way into your character’s head you see the world through their eyes.”

When this happened with Tatty, Christine’s fourth, and breakthrough book, she knew she had found the key.

“I felt the rhythm of it. I heard the little girl’s voice. I wrote a page, then I called my daughter, who was six at the time, and asked her to read it. It sounded grand!”

The novel opens with Michael’s journey from his adoptive family in New York to Cape Cod. Life has been tough for him; he’s been made to ‘unlearn’ German and forget all the tragedy of his young life. In the end, though, it’s Richie, the young boy he’s been sent to befriend who is the lonelier of the two. He’s grieving the loss of his father, killed in the war.

The boys meet Edward and Jo Hopper and strike up a friendship. Edward is struggling to paint, and through him, the author describes the, often difficult creative process. And what goes for painting, Christine says, can also apply to writing. And this novel, in particular, proved excruciatingly complicated.

It started in Cape Cod on holiday.

“We went there after an event in Boston, and we went on the Edward Hopper Tour. I loved the light and knew Cape Cod would be my location, and thought I would put Edward and Jo Hopper in the distance, as silhouettes.”

The main focus – Michael – had been in her mind for some years.

“I met someone who was in post-war Germany as a little boy. He was sent to France on a train to be fatted up, and he didn’t know any of the other boys. I said, ‘God, like little piggy goes to market,’ and he said, ‘Exactly like that.’ It stuck my head.”

She got thinking about President Truman’s initiative to bring in young refugees from the camps and Americanise them, when Trump showed the exact opposite inclination.

“I knew I wanted to write about the little boy, and his being German.”

It was at that stage, back in 2015, that the creative process was rudely interrupted.  Christine has an autoimmune disease that necessitates her having an infusion every six months. After each one, she has to stay at home for six weeks building up resistance. Because of this condition, she is carefully monitored.

Attending the doctor to get some prescription drugs, she mentioned, in passing, that she had a niggly pain, and her doctor sent her for an ovarian scan.

“She rang me and said my ovaries were fine, but she’d like to get my kidneys checked. I was away for six weeks, then I went for the scan, and they said I had a kidney tumour that had to be removed.”

Fortunately, caught early, the tumour had been contained, but that didn’t stop Christine from being extremely ill in the aftermath.

“I was off the medication for the autoimmune and was in a lot of pain. It was one thing after another. I had a migraine for 2 months, and insomnia, and I thought I was dying. I was so sick, I forgot about writing the book.

“While I was trying to recover, I watched a documentary I had recorded earlier about Edward and Jo Hopper and their little house in Cape Cod. I watched it over and over; it was soothing with the sea and the music. I became interested in their marriage and the differences between them.”

Deciding to put their story in the novel, Christine, literally, prayed that she would live long enough to complete her book.

“I decided to write for 15 minutes a day. That exhausted me. After two days I went up to half and hour and I slowly built it up.” And meanwhile, her husband took time out to look after her, and afterwards, decided to retire early, sell his legal business, and enjoy life.

By April 2016, Christine was well enough to go to Canada for a book tour, and, whilst in Montreal, she went to hear Holst’s Planets Suite. Listening to Mars, The Bringer of War, she thought about Michael, who, in a sense, brought the war to America, and Jo, who is warlike in the way she’s always looking for a row.

“Then there was Venus, Mercury and Jupiter. They all fitted. I had my structure.”

At the opening, the reader feels sorry for Jo – it seems that she’s married to a brooding monster – but as the story progresses, and we get to see the dynamic in the marriage, empathy shifts.

“Jo left a diary behind and its very up and down. One minute Edward is the most beautiful man, and the next, he’s the worst. I soon realised that everything negative I’d read about Edward Hopper was coming from her. All their mutual friends said Jo was a handful. She was volatile and obsessively jealous.”

For all that, Christine understands Jo.

“She desperately wanted to be an artist. She’d push her work on people. I’ve seen some of her paintings and she just didn’t have what it takes. And she wasn’t able for that lack of artistic recognition.”

Jo was the daughter of an alcoholic – something she shares with the author, but the effect, on Jo, was different.

Christine’s colourful Dublin childhood is replicated in her early novels. Her parents were friends with Brendan Behan, Patrick Kavanagh, and Liam O’Flaherty. Luke Kelly once bought Christine a guitar.

“I was about 12 and wanted to learn it. I gave it away 2 months later because I couldn’t play it.”

Christine is currently in good health. Living in London recently, she walked about ten miles a day.

“I was researching for something new,” she says, and talks of all the characters she met there, at a boxing club near the Grenfell Tower. “It might be a play.”

Advance praise for The Narrow Land has been glowing, as well it should be. It’s the best novel I’ve read in ages and deserves to be in line for a prestigious prize. However, Christine’s ambition is simple.

“I want to work for as long as I can,” she says. “When I’m writing I switch my brain into the book completely. I zone into that life. At the end I’ve created a world and brought something from inside myself out. That’s what I love about it.”

Published in The Irish Examiner on 16th March, 2019