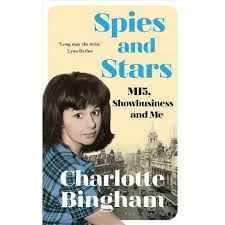 I’ve always been aware of the writer, Charlotte Bingham. I remember my mother laughing out loud, reading Coronet Among the Weeds, Bingham’s send up of her time as an English debutante, ‘doing’ the season. In the seventies, I watched Pauline Collins play her as a young wife, in ‘No Honestly,’ and was glued to all the television series she co-wrote with her late husband, the Irish actor and writer, Terence Brady.

I’ve read five of her 41 books and couldn’t wait to chat to the 76-year-old about her latest venture. Spies and Stars follows on from last year’s fictionised memoir about her time, in the fifties, working for MI5, under the auspices of her father, John Bingham, 7th Baron of Claremorris. (He is said to be the inspiration for John Le Carre’s Smiley.)

Spies and Stars sees ‘Lottie’ still working there, but also breaking into film and TV writing with her actor boyfriend, Harry.  But is Spies and Stars a true depiction of Charlotte and Terence’s pre-marriage years?

“The first book, MI5 and Me is intensely autobiographical”, she says, on the phone from deepest rural Somerset.  “It’s almost verbatim, and this one is based on all sorts of experiences, though not necessarily in sequence. Obviously, you change the names for the sake of kindness.”

Against the background of a time when televisions had to warm up – and be ‘converted,’ to receive ITV; when it was considered  trivial to write for the screen; and was social death for an actor to appear on an advertisement; we follow lovers Harry and Lottie as they battle to get a foothold into the worlds of theatre, film and TV.

It’s a fabulous portrait. The duo constantly put themselves down, admiring others ‘who colour the room they are standing in’, believing neither of them do so. Lottie admires her colleague, Arabella. Who was, ‘the kind of friend who just knew when you were in desperate need of egg mayonnaise.’

“Arabella has turned out to be a bit of a star with readers,” says Charlotte. “They all love her.”

After a few false starts, their writing collaboration brings them both profile and success. They describe writing together as more intimate than making love.

“Well it is much more intimate, especially with comedy, because all your failings come out,” says Charlotte. “If the line falls flat it can be embarrassing, and how ever much the other person loves you, they have got to say, ‘No. I don’t think so.’

In real life, the start of Charlotte’s career, at 19, was serendipitous. She was in the Ritz and told a friend of her parent’s that she had just finished writing a book. He happened to be a literary agent. It’s been reported that she was drinking champagne at the time, but not so.

“I wrote there when I had time off from MI5,” she says. “You couldn’t sit down for less than 15 shillings in Mayfair’s coffee houses, and I realised that for 2 shillings and sixpence I could sit in the downstairs Ritz bar with a tomato juice. They’d give me olives and nuts and things. They looked after me very well.”

Coronet Among the Weeds, published in 1963, brought her instant and overwhelming success. She was being published all over the world, having book tours, and appearing on American TV shows; something hugely disapproved of by some of the established writers.

After that success, thinking having started at the top, the only way was down, Charlotte was worried about penning another book.

“I thought I’d have to think about this. Anyway, then I got married to Terence and we started to write together.”

Television, in those days, was still aligned to the theatre.

“When a Play for Today was on it was like a first night. People would stop you in the street and tell you what they thought. Sometimes, that was unfortunate.”

Their collaboration, from the sixties, through the seventies, eighties and nineties, included work on the first few episodes of Upstairs Downstairs; on several Plays for Today; on Take Three Girls, Robin’s Nest, and, perhaps most notably, No Honestly and Yes Honestly. These last two were based on Coronet among the Grass, which told of Charlotte and Terence’s early marriage.

“The first episode of No Honestly was just brilliant!  Before that we had been supply writers, and this was our own comedy series. It was something we had both wanted to do. It was shown on a hot night, and nobody expected anything of it, but the audience just erupted! They loved it!”

Collaborating, clearly made them happy. In Spies and Stars, Charlotte, as Lottie says, ‘Talking about a new idea was very close to saying we lived happily ever after, because new ideas make you feel like that.’

“We had such fun! We shared the same disappointments, but the same joys too. When we took an, occasional, holiday, we found it hard to switch off. The first person who talked work had to buy a bottle of champagne. And that was always me!”

In the nineties Charlotte spent her time writing historical romances. She wrote one or two a year until 2009 – but has penned just two since – the last in 2012. How did the new series come about?

“It came as a complete surprise to me,” she says. “I hadn’t written in the first person for so long, but I woke up one morning at 5.00am and trotted down to my work room and sat down and wrote the first chapter.”

Then she laughs, saying that the next bit sounds too ludicrous to be true.

“I got a letter from Alexandra Pringle of Bloomsbury, asking me if I would write an appreciation of something, and by the by, she said she had loved Coronet Among the Weeds. I wrote back and said of course I’d do whatever she wanted, and I said, ‘You won’t believe this, but I’ve just written a first chapter in that style.’ I sent it, she read it, and said, ‘It’s bliss!’ I wrote another chapter and sent it to her, and we went on like that. She just loved it!”

‘Bliss’ describes Charlotte’s writing beautifully! She writes with the irreverent humour of Jilly Cooper, and, as Lynn Barber exclaimed, with the exuberant delight of a teenager, and this joie-de-vivre comes across in our conversation. It’s clear that though life has recently dealt her blows – her husband Terence died just two years ago – but she’s close to their two children, both successful creatives. And she embraces every day.

“I’m not really aware of being a writer,” she muses. “I just think things and then I write them.” For all that, she’s at her desk every day at nine o’clock, and always has been.  “It’s almost as if a magnet is pulling you towards your workroom. It’s important to keep your imagination fit – like any other bit of your body. If you take two or three weeks off, it goes away.”

“It depends on the muse. She might not visit. I don’t know what I’ll do if I don’t write. I ask has she still an ambition. She pauses, saying that’s an interesting thought.

“I just love making people laugh,” she says. “It’s lovely when people like you ring and say you laughed. People feel very affectionately towards you if you have made them laugh.”

‘She made them laugh’, we both agree, would make a pretty good epitaph.

Published in The Irish Examiner on 13th April