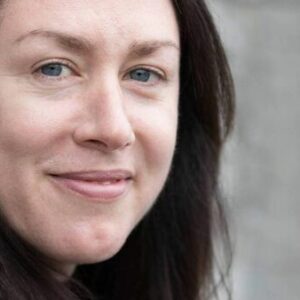 It’s a warm September day when I meet Caitriona Lally in the garden of MOLI – the Museum of Literature, Ireland. It’s my first interviewing trip to Dublin since the pandemic hit. Caitriona arrives fresh from her cleaning job at Trinity College Dublin – and as we chat, we’re relishing being here, face to face, with life, almost, back to normal.

Back in 2018, Caitriona was in a writing slump. Her debut novel of 2015, Eggshells, seemed dead in the water, and she was struggling to tame her follow-up.

“I had one child, and was pregnant with my second, and I kept thinking, is it worth it?” she says.

She had come up with the idea for Wunderland before her debut had found its publisher. She had her characters – Roy and Gert – siblings with more than their fair share of troubles – and she’d chosen her setting.

“I’d gone to Hamburg in 2014 and had fallen in love with the place and especially Wunderland,” she says, talking of the famous miniature railway and airport exhibition – the largest of its kind in the world with 400,000 human figurines. “I’d gone back the following year and done too much research. I filled notebooks with detail. But life kept getting in the way of the writing.”

It was then that she received some good news. She had won the prestigious Rooney Prize for Eggshells, and on the back of this, Eggshells was published in England. This boost of confidence, whilst welcome, didn’t result in a release of her creative juices; she was simply too busy. The children had medical problems resulting in hospitalisations, and with her cleaning job at Trinity College, there was little time to write.

“I felt like giving it up multiple times,” she says. “I thought maybe I should try something else. But I’d spent so long writing it, and I knew it would always be there; I wanted it gone. If you’re paying for childcare so that you can write and you’ve no faith in what you are writing, what are you doing?”

She was still struggling with the novel in 2019, when she won the Lannon Literary Fellowship – worth a massive 100,000 dollars. It was around that time that she bumped into editor Aoife Walsh at the launch of a book celebrating 50 years of RTE Radio’s Sunday Miscellany. Hearing that Catriona was working on something, she asked to see it. The two met in early March 2020 – just before Covid hit. But when Aoife said that she’s like to take the novel on, Catriona hesitated.

“It was funny,” she says. “I almost didn’t want Aoife to publish it. I felt it was so spawling and unwieldly. But Aoife said, ‘The basic novel is there. We will work at it’. She saw the potential that I’d become too close to see.”

The edit, however, turned out to be a mammoth task – almost harder, Catriona says, that the writing itself. And fitting it all in, during lockdown, proved far from easy.

“March April and May were hard when the creche was shut. Brian was working from home. He minded the kids until I got home at 10.00 am, but he had a conference call timed for ten. He’d be bouncing our son, who was 11 months and trying to keep an eye on our daughter, who was two at the time.

“I then took over, becoming the 100pc carer. I took holiday days so that I could sleep for normal hours and try to write and manage the kids. My daughter was missing her friends and needed more one to one time, and they both have so much energy. They never stop! It was like a house of cards; one thing changes and the whole thing collapses.

“I was also working on a screenplay for Eggshells and had a deadline for that. They were intense months – writing from my bed when I had any time – but we were lucky. We were healthy. Our parents were well. And we had jobs.”

But in April this year – just as things were looking brighter, Caitriona caught Covid. It was hard; she struggled to breathe and has still not regained her sense of taste. Tea, she says, tastes like grass. But the hardest part was hiding her illness from her children.

“My eldest kept hearing about Covid from creche. She’d come home and say, ‘If you catch the virals, as she called it, you die.’ I was trying to keep a semblance of normality and hide it from her. It was uncomfortable, but I figured I wasn’t going to get too sick.”

This second book has taken seven years in all  – years of angst and difficulty, with seemingly endless edits – but the effort was well worthwhile. Wunderland is an absorbing tale; an insightful character study of two disparate siblings.

Gert has sent Roy to Hamburg because some unsubstantiated rumours about him are in circulation. Working as a cleaner at Wunderland, he is struggling to regain control of his life and connect with those around him. He has plans, however, which involve tinkering with the exhibits, to render the exhibition more logical – to his eyes at least. He resents Gert’s visit. It’s an intrusion, and he deflects her attempts to work out how his unusual mind works.

A man of obsessions – Roy is ‘different,’ his thinking literal and his emotions stunted. He shares characteristics with Vivian, the quirky protagonist of Eggshells. Fictitious characters like her have gained in popularity with the publication of novels like Ronan Hession’s Leonard and Hungry Paul.

“I’d struggle to write a normal character,” says Caitriona, laughing. “Gert is really grounded but Roy is off his head. She gets drunk and has affairs, she is flawed. She’s been living in a pressure cooker and trying to bring up her kids in it, and now she has to deal with her brother. But she’s not a romantic heroine.”

Wunderland is beautifully written. There’s a lot of humour and some clever wordplay along with memorable one-liners. Roy, for example, ‘had tried sex and found it to be as unsatisfactory as making bread in a bread maker or eating a boiled egg without salt.’

Gert has brought her problems with her. With little to do, she is examining her marriage – which has become an increasing burden as her husband fights suicidal tendencies.

“That was important to me,” says Caitriona. “It’s interesting to see the person who watches on helplessly. It’s the silence of depression. As Gert says, if it was a physical illness she could talk openly and tell the children’s teachers, but she feels she can’t. She’s bottling it up.”

Roy has a particular obsession with train timetables – something shared by his creator.

“I love timetables and I’m obsessed with maps,” says Caitriona. “I love looking at them and imagining places, but I can’t read a map. I have no sense of direction and I can’t drive. I’m the one directing and I’m useless.

“I went interrailing as a student and I loved it! But I have this weird thing that whenever a train lands on a platform I forget to look where the train is going. I just have to get on that train. I was travelling around Scotland with my younger sister, who trusted me. We’d get on a train and discover it was going in completely the wrong direction!”

For her next project, Caitriona is toying with the idea of non-fiction.

“I got so into the world of make-believe and now I want something real,” she says. “I spent too long passively writing Wunderland, and now I want to write more deliberately; to be sure what I’m doing and to write intensively.”

Wunderland by Caitriona Lally is published by New Island. €14.95.

Published in the Irish Examiner on 27th November.