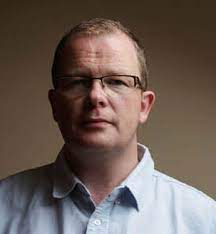 In Blood Ties, Brian McGilloway’s 12th Crime novel, Ben Devlin is called to the scene of the murder of a man who, as a teenager, killed his friend, Hannah Row. The death occurs on the anniversary of the crime, and, bizarrely, an exact match of the dead girl’s blood is found at the scene.

“I had that idea seven years ago, but until now, I could never find the right story,” says the author, on zoom from his home in Strabane, County Derry. “I love the concept that we create others’ identities as much as we create our own. How would the victim be seen in that case? Would it be the person who had been killed, or the owner of the blood?”

As he investigates the case, Devlin frequently crosses the border from his home in Lifford, County Donegal, as he liaises with Hendry, his counterpart in the PSNI.  Devlin discovers that, since his release from prison, the dead man, Brooklyn Harris, has been grooming young girls, and attracted the attentions of a vigilante group. Pursuing justice for Harris, Devlin is met with opposition from all sides – but he doggedly carries on.

Devlin is a little hot-headed at time and is not averse to using his fists. He doesn’t always follow the rules, but he has a strong moral code. But, unlike most detectives in fiction, he is a dedicated family man who worries about his college going daughter, and is having to face the imminent death of his beloved father. These preoccupations mirror those of the author.

“It’s not deliberate, but I find when I’m writing a story, I Include the things that are concerning me,” he says. “My eldest son is, hopefully, heading to college next year, and my father got sick last year, and within two months passed away. My mum, brothers and sister spent so much time in the hospital; we were able to have those moments, and it’s given me massive empathy for people who have lost loved ones in the pandemic.”

Blood Ties in set in early 2020, when worries about the Coronavirus were fast becoming reality. An English teacher at Holy Cross School, McGilloway was finding teaching online more than a fulltime job.

“I imagined I would have loads of time to write but working from home you never switch off,” he says. “The kids were emailing me at 3 am with questions. I didn’t get anything done until the end of June.”

Until 2011, McGilloway was head of English at St Columb’s College in Derry City. He left and took a break for a couple of years before starting his current post at Holy Cross School.

“I wanted to write fulltime,” he says, “but after 20 years I found myself missing the social aspect. There is nothing better than sharing a love of books. And no better joy than introducing a class to Gatsby, King Leah or Waiting for Godot, and seeing them ask the questions that you asked at 17 and 18.”

McGilloway has always written; at 16, he wrote a story about a protestant and a catholic falling in love across the barricades, and at 18 he wrote a play about a man with Alzheimer’s.

“As students at Queen’s my friends and I put on plays; I wrote some then started directing.”

After his degree, he wrote a novel about two psychiatrists, but when one publisher said, ‘not for us,’ he put it away. He wrote stories throughout his twenties, but never sent them out. And it wasn’t until he was married, and had a baby son, that he took up writing more seriously.

“I wrote the first Devlin book, Borderlands, as an experiment, to see if I could write a novel,” he says. “It was a selfish exercise, not necessarily for publication. I had been reading a lot of crime series and felt sad that all the characters I loved were either dying or retiring. And there would be no more books coming. I wanted to write a book for myself, with a character whose company I would be happy to spend time with.

He set his Devlin series south of the border because he felt it would be easier to write a straight crime novel there, rather than one encompassing the troubles, with paramilitaries and IRA a necessary part of the plot. And making his hero a married policeman, enabled him to get away from the whole alcoholic detective scenario.

After four Devlin books, however, by which time the McGilloways had three sons and a daughter, the situation in Northern Ireland had settled, and he decided to write a book based there. Little Girl Lost, featuring DS Lucy Black, was supposed to be a standalone, but ended up as the first in a series of four.

There has since been a standalone, but when he had an idea that suited Ben Devlin, he was more than happy to return to him.

McGilloway’s books are much more rounded than the average thriller. Beautifully written, the plot driven by the characters, they are concerned with politics and issues of the day. In Blood Ties, the follies of Brexit get more than a mention.

“The whole thing just seems so unnecessary,” he says. “Whenever the debate was happening the people advocating for Brexit were from dissident republicanism and extreme loyalism who were looking for social fracturing. Why isn’t the impact of this being considered? I get a sense of the British making it up as they go along hoping it will all be okay.”

The author doesn’t plan his books.

“I know people who have a clear sense of outline,” he says, “but I’ve never been able to do that. I can’t work out the theme when I’m writing. Once I know how the story is going to end, I don’t see the point of writing it. I lose the momentum.”

Since McGilloway penned his first thriller, there has been an extraordinary flowering of literary talent in Northern Ireland, with many choosing the crime genre. And the reason for this, he says, is that with the peace process, and lack of a truth commission, there’s an uneasy alliance between old animosities, with each side representing their own views of the past.

“Crime fiction is always going forwards, yet looking backwards to work out, how did we get to the dead body on page one. And as a society we are trying to move forwards yet learn from what happened in the past.”

McGilloway is currently writing a stand-alone thriller, getting up early in order to write before the household awakes. He loves writing.

“What’s not to love? You disappear into your own world, and you have complete control.”

It was for this reason that he started to write in the first place.

“I felt compulsion to write my first Devlin book after the birth of my first son, Ben,” he says. “I worried when my wife was pregnant that things would be ok. But I thought that once the baby was born, I could stop worrying. Then he’s born and you realise you have total responsibility and a complete lack of control.

“In a crime novel, the crime is solved, justice is done, bad people get what they deserve, and good people normally get some form of reward. When control is lacking in the real world, at least I can control my fiction.”

Published in the Irish Examiner on 8th May