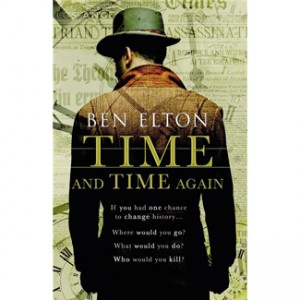 If you had one chance to change history, where would you go? What would you do, and who would you kill? This was the question posed to Hugh Stanton, hero of Ben Elton’s new novel, Time and Time Again.

When she asks which one event in history he would change, he engages happily, having loved the fireside debates his professor conducted back in 2006, when he was an undergraduate of history.

With some prompting, he says that all that has gone wrong in the world dates back to 1914, and the outbreak of World War 1. Therefore, Hugh would prevent the outbreak of that war.

This opening section is more or less conventional. Ben Elton’s view of England 10 years on seems plausible. Whilst the internet age has taken over completely, and has obliterated shops and decreased the population’s attention span, some traditions still hold firm.

Hugh enjoys attending the nine lessons and carols at King’s College, and meeting the elderly dignitaries at the university, but his sense of equilibrium isn’t set to last.

McCluskey and her cronies have a plan. Papers left to the college by Sir Isaac Newton detail the possibility of time travel on a certain day, through a cellar in Istanbul, and Hugh is told to travel back to 1914, and to prevent the assassination of Archduke Franz Ferdinand, so averting the war.

Hugh has been chosen because, famous as ‘Guts’ Stanton, he’s brave and skilled. It helps too, that he’s little to live for, having lost the will to live when his wife and children were mown down in a particularly nasty hit and run. The notorious McCluskey though, has plans of her own.

Her involvement, and Hugh’s diversions in Istanbul, almost scupper the plan before it’s even begun. The author knows his history, and it’s fun seeing historical characters and indeed, Berlin in 1914, if only to realise how serendipitous the success of the Serbian plot to kill off Franz Ferdinand was.

As McCluskey says, it was all down to a wrong turn and a cheese sandwich. It should be easy for Hugh to intervene and prevent the killing.

What though, would have happened in Europe had the Archduke remained alive, and the Kaiser then shot to ensure peace in Europe?

This is where Elton’s imagination lets fly. He shows Berlin starting to spiral into lawlessness and chaos. Meanwhile Hugh, travelling through Europe has met Bernadette Burnett, a suffragette from County Wicklow.

She’s surprisingly forward, and he falls in love with her; and she with him. How can she resist a man who takes female emancipation as a given?

Elton has fun with this section, showing, through many misunderstandings between the couple, how much liberty we have taken with the English language over the years. I thoroughly enjoyed the first two thirds of this novel, but then the plot twists intensify, and the narrative becomes ever more complex and confusing.

I felt that the ambitiousness of the central idea was causing the plot to unravel at the seams. The author appeared to be floundering, rushing the end in his hurry to wrap things up. And if Elton had lost heart, along with his characters, then frankly, so had I. And that was a shame. Like a backwards firework, the novel that started with such a bang, ended with a fizzle.