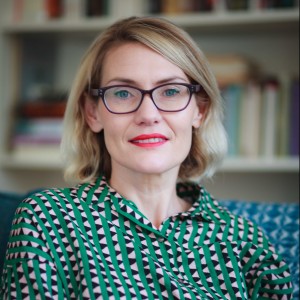 A prolific writer as a child, Zöe lost her confidence as a teenager.

“I was too intimidated. It was, almost, as if I’d read too much!”

During university holidays, she went to America, then taught English as a Foreign language in France and Spain.

“Then, after university, I taught in Japan.”

She moved to London, worked for the Arts Council and tried to write, then, at 26, she did her teacher’s training.

“I taught in a London Comprehensive for three years. It was tough but I loved it. I had a creative writing club there.”

Moving to America, she taught in an International School in Washington, until her son was born.

“I started writing seriously when my second child was 18 months old. Back in England, teaching part-time, I took a course in writing at a local college, and then I wrote a novel. It wasn’t good and I didn’t send it anywhere, but I’m glad I did that.”

Her mother in law gifted her the money to take an MA in Creative writing.

“I started The Night of the Flood there, but afterwards rewrote it several times before securing my agent in 2018.”

Who is Zöe Somerville?

In Another Life: “I’d be a Man Booker Prize winner, but also, an artist.”

Second Novel: “It’s a ghost story with a dual timeframe.”

Top Tip: “Keep reading during the writing process; you’ll get something from every book– a sentence or an interesting point of view. Have self-belief, but be willing to accept constructive criticism.”

It’s Norfolk, 1952, and Verity Frost is studying for Oxbridge. Unsettled by her mother’s death by drowning, she’s caught between two men; her childhood love, Arthur, and Jack, an American airman stationed nearby. When the flood comes, everything changes.

The Verdict: A real gem. Visual; atmospheric and exciting; the characters are quite beautifully drawn.