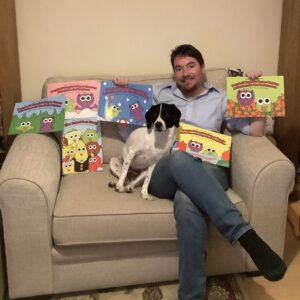 Badly dyslexic, at a time this wasn’t fully recognised, Trev struggled at school.

“I loved drawing in primary school, but that skill disappeared when I was a teenager.”

During and after college, Trev worked in bars and cafes.

“I was bar manager in the Cork Arts Theatre and worked close to the arts in the Everyman Palace.” He continued his bar work for twenty years until the first lockdown closed everything down. And then he decided it was time for a change of direction.

He began drawing again six or seven years ago, making a rudimentary crayoned book for his new niece. And from 2018, he began writing picture books in earnest, selling them to libraries and in markets.

“I sell online as well, and often get repeat customers.”

In September, Trev started working in Scoil Mhuire in Ballincollig as a Covid cleaner.

“The children’s artwork was amazing! After work I’d draw random pictures based on the ideas I got from them. One of the children had titled a drawing, ‘We really are the best bunch.’ I used that.”

Who is Trev Burke?

In Another Life: “I’d love to be a singer. I was in a band for years.”

Favourite Writers: Terry Pratchett; Stephen King; Roald Dahl: Dr Seuss; Martin Handford. “As an anxious, dyslexic child, I adored the Where’s Wally books. They were the greatest thing in the world to me.”

Next books: “I’m working on two series of picture books; one with an underwater theme – and the other for Halloween.”

It’s Purple’s birthday, and he and his friend Reggie are playing with butterflies in a field. But grumpy old Mr Waffles has taken all the baby carrots and escaped with them into space in his rocket. How will the two friends help the carrots and save the day?

The Verdict: Fabulously colourful books that will fire any child’s imagination.

Published in the Irish Examiner on 17th July.