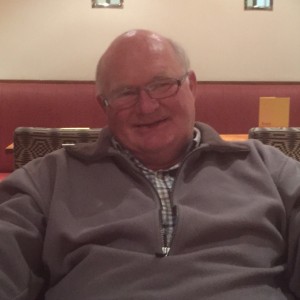 Tim taught in India with the VSO after college, then moved to London to study accountancy. Back in Dublin, he joined the National Irish Investment Bank, where he remained until 1990.

“After that I lectured in the Irish Management Institute. Since I retired, I have continued to work there part-time.”

Tim has always enjoyed writing, and when the Celtic Tiger started to implode, he began writing articles about the conundrum. When the banks started lending recklessly in London, Tim felt it could never happen in Ireland.

“When it did happen, I thought, there has to be something that has changed. It couldn’t have happened in my time as a banker, because people were cautious. At some stage that mindset went and the casino mindset replaced it. That’s a dumb game for a banker.

“I wrote articles in Accountancy Ireland, wondering why the bankers got it so wrong and why they were still in denial. I wanted to expose them. I worked for 20 years in the industry and then the whole thing blows itself apart. That’s depressing; a mockery of what your work has been.”

Who is Tim McCormick?

The Day Job: A bit of consulting, and bit of writing.

Interests: Salmon fishing, bridge, and singing in a choir.

Second Book: “I’d like to do one, when I find another subject that I feel passionately about.”

Top Writing Tip: Remember who your audience is, and write in a suitable style for them. This book was for people who had no interest in banking and didn’t understand the crisis.

McCormick argues that the primary cause of the banking crisis was the pursuit of profit, and disregard for their customers practised by bankers. He then sets out a clear reform programme which will ensure that such behaviour cannot be repeated.

“It’s about culture and ethics. If the bankers don’t change the way they are behaving, the crisis will happen again.”