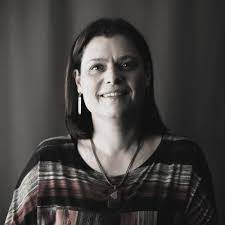 Sue wrote poetry as a teenager, and considered journalism, but instead studied European Studies.

After taking an MA, she taught in secondary schools in Derry for seven years.

“I loved teaching teenagers, but I got fed up with the bureaucracy, and applied for a job as communications officer for Derry City Council. Three years ago, I switched to working with communities, doing peace and reconciliation work.”

During her twenties, she wrote a textbook about citizenship in Northern Ireland, but she didn’t attempt fiction until 2016.

“After my divorce I was a single parent, and I was fed up with TV, so I started to write. The idea came because in 2016, all the emphasis was on the centenary of the Rising and the Somme. I thought, who is writing today’s story?”

With the first draft written the learning began.

“I attended a writing class with Bernie McGill; I took part in the Irish Writer’s Centre Cross Borders Project and did an online Curtis Brown Creative course, how to edit and pitch your novel.”

The combination worked! In 2019 the honed novel was shortlisted for the Caledonian Novel Award and was a finalist for the Irish Writer’s Centre Novel Fair.

“I met my agent Laura Williams there.”

Who is Sue Divin?

In Another Life: “Working in human rights, somewhere warmer and drier than Derry.”

Second Novel: Truth be Told, due next year.

Top Tip: “Breakthrough is possible; and make your own luck.”

It’s 2016, the troubles are over, yet the repercussions linger. 18-year-olds Aidan and Iona want to be together, but their families, staunchly entrenched on opposite sides, oppose the relationship. Why is peace harder than war?

The Verdict: Outstanding! A comprehensive, and emotionally charged foray into Northern Ireland’s complexities.

Published in the Irish Examiner on 3rd April