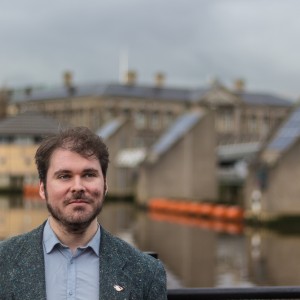 “It was a strange rhyming poem about a mayfly. I didn’t write any more, after that, until the difficult teen years, when I wrote a few poems.”

He was more interested in music at that time, playing the guitar in ramshackle groups, and it wasn’t until he was at university that he took his writing seriously. He wrote his debut as the project for his PhD in Creative Writing.

“It started out as a book about a video game, in the spirit of nature poems. I wanted to apply those landscapes with all the detail intensity and focus, but to describe the landscapes of a video game rather than the real world. But my subconscious was instructing me to write about my mother’s death in 2012. I was surprised when the book became about grief.”

Graduating from the PhD in March 2017, he taught in Queen’s University on a temporary basis. Then a permanent position became available.

Winner of an ACES award from the Arts Council of Northern Ireland, and recipient of an Eric Gregory Award, Stephen’s poems have appeared in Granta, POETRY, The Stinging Fly and Poetry Ireland Review.

Who is Stephen Sexton?

Family: Father and brother. “They live in County Down.”

The Day Job: “I teach at Queens University on the Creative Writing Programme.”

In Another Life: “I’d spend my life playing pool.”

Second Novel: It will be a collection.

Top Tip: “Read to understand the traditions you are engaging in.”

In writing about the death of his mother, Stephen takes us through the levels of Super Mario World, the two landscapes bleeding into each other. It’s an exploration of grief; of how memory changes an experience, and of the importance of the unreal.

“I hope it occupies a unique space, and I would hope it might be helpful to somebody who’s stuck in a position of loss.”

The Verdict: Remarkable. The poems making up this extraordinary narrative, are beautiful and deeply felt.

Published in The Irish Examiner on 14th September.