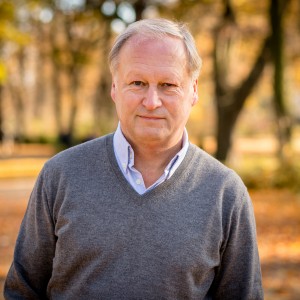 “I was always starting books – I   was the king of great beginnings – but I could never finish a one. There was always the pretext of my fulltime job and the children, and I would put the manuscript away after 60 or 70 pages. Then I realised the kids had grown up, so if I wanted to write a novel, the time had come.”

He found a press clipping about a famous Jewish scientist, and thought he could spin a story around him.

“I wrote about him for two years, then realised I needed an outside voice, and found Lilya. Once she became the protagonist it was easy.”

Who is Stephan Abarbanell

Date of birth: 1957 in Brunswick, but grew up in Hamburg.

The Day Job: Head of cultural department for a public regional TV and radio, responsible for the cultural affairs of the region, and some nationwide programmes.

Second Novel: “I’m in the process, about half way through.”

Top Tip: “Don’t think about it, do it. You have to work on the text 2 to 3 times a week. It doesn’t matter what you do; you can read it, edit it, or write it, but you have to deal with the text constantly.”

It’s 1946 in Jerusalem, and Elias Lind refuses to accept that his brother, a scientist, died in a concentration camp. He persuades Lilya, a Jewish resistance fighter to search for him. As she traverses the devastation of post-war Europe, she realises someone else is in pursuit.

“There’s not been much written about 1946 – there’s a gap between the war and the cold war of the sixties. I didn’t know much about the period, and thought writing about that time would be interesting.”

The Verdict: A character based thriller set amongst the dispossessed. Well researched and engrossing.

Published in The Irish Examiner on 25th March