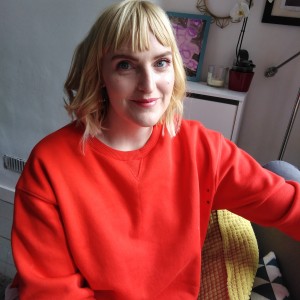 An only child brought up in Sandymount, Sophie always read. But she chose art, because writing was a family business.

“I loved NCAD and got a first-class degree, but I loved drugs as well, and they got the best of me. I had a nervous breakdown at 22, and never did art again.”

Unable to go travelling as planned, she worked in a second-hand book shop.

“I found reading comforting, but I was acutely unwell for five months.”

Recovering, she joined her boyfriend, now husband in New Zealand, working as a chef for two years.

“Then we moved to France, and did chalets for four years while I got better. I got into snowboarding, skiing and hiking.”

Back in Dublin, working as a chef, she started her food column with the Sunday Independent, and that led to a book – Recipes for a Nervous Breakdown, in 2016.

Sophie started on her debut in 2017, having worked on various projects and become a fulltime freelance journalist. Most of the writing was done last year.

Who is Sophie White?

The Day Job: Journalist and Podcaster.

In Another Life: “I’d be an unbearably overpowering member of a regional community musical theatre project. I’d be on the stage singing and dancing quite badly, taking it very seriously.”

Ali’s life is a mess, but she’s determined to reach 10,000 followers on Instagram, and win an influencer award. Her heroine, Shelley Divine’s life seems perfect. But what is she hiding from her adoring followers and her family?

“I joined Instagram to publicise my memoir, and became fascinated by it. It is such a hilarious alternate reality. People are play acting sincerity to an audience, there’s a disconnect.”