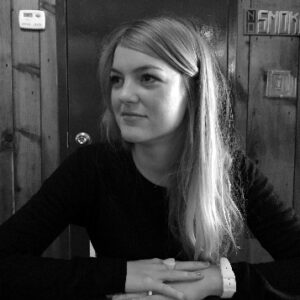 “My Mum was always writing,” says Sophie. “She was never published but she always encouraged me. I felt writing was possible.”

Sophie started writing in the final year of her degree, and after her MA, she offered her services, free, in The Sunday Times.

“Having got my foot in the door I spent a decade editing – including for Lyn Barber and AA Gill. When I left, I went Freelance and worked at the BBC, Tatler, The Guardian and the Financial Times.”

She got the idea for The Flames in 2015, when she attended an exhibition of Egon Schiele’s radical nudes, and, blown away, left knowing that her debut novel would feature him and his models.

“I couldn’t believe that he had died at 28, three days after his pregnant wife. I researched, found my synopsis and fleshed it out. It took me seven years from the idea to publication.”

Who is Sophie Haydock?

In Another Life: “I’d be an Archaeologist. I love the idea of digging into the past. I have recently started Mudlarking at The Thames. On every tide, stories come to the surface.”

Second Novel: “It’s based on another painter.”

Top Tip: Embrace rejection as part of the process and aim for 100 rejections a year. Enter every competition. In 2018, by doing that, I was longlisted for 4, shortlisted for 1, and I won another.”

In early 20th Century Vienna, Gustav Klimt’s protegee, Egon Schiele exploded onto the Art scene, bringing scandal in his wake. The Flames focuses on the four women who modelled for Schiele – on their tempestuous passion, rivalries and betrayals.

Published in The Irish Examiner on 2nd April.