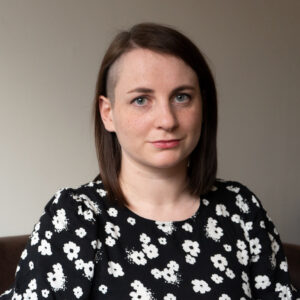 From university Sheila worked in publishing interning with New Island, Lilliput, and The Irish Writer’s Centre before going freelance for three years.

“After that I went to South America, and then to Roads Publishing before settling with Gill Books in 2016.”

“I was always taking classes,” she says. “I did a six-month course with the Stinging Fly. I’m still in touch with a group from there.”

In 2019 Sheila gave herself a year off the day job, in order to concentrate on writing, and she hasn’t stopped since.

“I can’t imagine myself doing anything else,” she says. “I love the playfulness and experimentation of short stories.”

Who is Sheila Armstrong?

Home: “Sligo will always be home. But I live in Dublin.”

The Day Job:  Freelance editing and writing. “I edit an annual for Gill every year.”

In Another Life: “I’m a foster parent for the ISPCA – so maybe I’d do something with animals.”

Second Book: “I’m working on a novel. It’s episodic and told in the voice of different characters.”

Top Tip: “Find the slanty way in. Think of an original image into a scene; one that will make readers stop and admire.”

Nothing is quite what it seems in these astonishingly assured short stories. In the title story, a fisherman guts a mackerel little guessing of the violence he’s soon to meet. In a quiet, rural field at dead of night, villagers are sucked under the earth beneath a yew tree. In Red Market a girl is taped, bound, and put on display at a country market – and nobody expresses surprise. Lemons shows the violations visited on a woman’s body, from home abortion through childbearing to mastectomy.

Published in the Irish Examiner on 19th February.