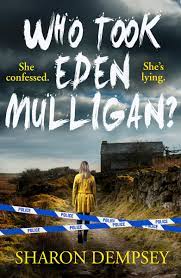 “I took an MA in London, then I Moved to Cardiff, stayed for 10 years, and had my first two children.”

She freelanced in journalism and also in PR.

“I was a health journalist, writing for the Irish Times, as well as health, parenting, and trade magazines.”

When her son had a brain tumour, dying at age six, Sharon wrote a series of health books.

Back in Belfast, she has been designing and delivering creative writing programmes.

Her debut was sparked by the idea of people utilizing the troubles, and the myths around them, to hide ordinary crime and to get rid of people.

Who is Sharon Dempsey?

In Another Life: “I’d love to run a bookshop in the bowels of a gothic castle.”

Top Tip: “Write what you want to know, rather than what you already know. Then you’ll be interested in what you’re working on. Stories can be found everywhere. Be open to that.”

When Iona Gardener runs into a police station, covered in blood, and confesses to the murder of 4 people, DI Danny Stowe doesn’t believe in her guilt. But why would she lie, and who has killed the young people? Danny gets his friend, the forensic psychologist Rose Lainey on side. There’s a link to the disappearance of a mum of 5 – but can they find the killer?

“I hope I’m writing in a way that important and significant, exploring stories through a fictional lens to find an emotional truth.”

The Verdict: An original take on the remnants of the troubles.

Published in The Irish Examiner on 6th March