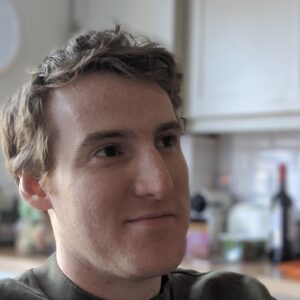 One of 11 children, Séamas has always loved reading and music. He played the flute as a child.

He released a few records in his twenties, but stopped, in favour of writing.

“Of the two unlikely hobbies, music was one too many,” he says.

After university, he moved to London and worked in a dead-end recruitment job.

“I hated it and did a lot of journalism and commentary on the side.”

Three years ago, deciding to make his hobby his livelihood, he quit the job. And he’s been writing fulltime ever since.

“I got noticed by writing threads on Twitter. That led to a column in the Irish Times about internet culture.”

He now has a weekly column in the Observer, and also writes for the Irish Times, The New Statesman, Guts, and Vice.

The memoir was postponed from pre-covid.

“I was devastated. But then everything got cancelled. If the book had come out then, it would have died.”

Who is Seamas O’Reilly?

Family: Married for 4 years to Ciara, and son Ruadh, 3.

The Day Job: Freelance Journalist, and Columnist with the Observer.

In Another Life: “My childhood obsession for being a footballer and winning the finals for Liverpool has never really left me. I’d love the great moments, but don’t think I’d enjoy the life.”

Second Novel: “I’m currently writing fiction and making a novel from something I wrote for radio.”

Top Tip: “Find out what you like to write about early on and be careful what you get good at. Getting in through Twitter, I’ve always written stuff I love.”

Séamas was 5 when his mother died – leaving his Daddy to care for 11 children in rural Derry during the troubles. Ever inventive, he got his children into music, built and filled bookshelves in every room, and trusted they’d turn out ok.

The Verdict:  Mixes humour with poignancy to show a united family, bonded by love.

Published in the Irish Examiner on 31st July.