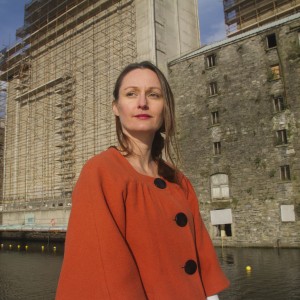 Although Sarah loved reading as a child, she didn’t think of writing until she was in her thirties.

“I’m very scientific. English was my most feared subject in school.”

She worked in geophysics for a year, then she started travelling.

“I travelled, off and on, for eight years,” she says. “I did a round the world trip, through Central America, Hawaii, Australia and Asia; I taught in South Korea, and I came home waitressing in between.”

Then she moved to Tanzania where she founded and ran a hostel, whilst also supporting community projects.

“I came back to Ireland before I was 30. I had been thinking about writing for some time and decided it was time to get on with it.”

She wrote a novel, then, realising it wasn’t good enough, she set about learning how to write, taking various courses. She also worked, part-time as a geo-physicist.

“And I did a ski season in Val d’Isere. I fractured my leg, then moved to Achill for the summer, and that’s where I met Bob.”

Who is Sarah Carroll

In Another Life: “I adore skiing, kayaking and other outdoor activities. I’d like to live somewhere where I could do all that daily.”

Favourite Writers: “I don’t have favourites. But I love books like Revolutionary Road, and I admire Tolstoy for summing up a character so well that you remember them.”

Second Novel: “The main themes are bullying and the power of words. It’s at the editing stage.”

Top Tip: “Join a writing group. People can help edit your work. It helps to get used to criticism, because when you’re published, the editing can make you feel worthless.”

A girl and her ma take refuge in an abandoned mill, escaping life on the streets. It’s the girl’s safe place, but her ma is spiralling out of control, and the authorities are getting ever closer. Can she move on before it’s too late?

The Verdict: A haunting tale that stays in the mind.

Published in The Irish Examiner on 19th August