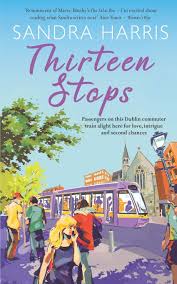 An introverted child, Sandra spent a lot of time reading.

“It was a great escape,” she says.

“I was home-schooling Reuben. There were difficult years leading to his diagnosis in 2016. After that, things became clearer.”

“They were about bad sex and failed relationships,” she says. This led to a self-published volume. “And I was shortlisted for the Strokestown International Poetry Festival. I’d written a poem about Ryan Tubridy.”

In 2014, Sandra felt the urge to write fiction.  She self-published a few books in various genres. Then, in 2018, when Reuben started attending school, and Sandra, taking him there, found herself on the LUAS Green line four times a day, she was inspired to write her debut. Thirteen Stops is a novel told as 13 connected short stories.

“It was easy to write,” she says. “It felt different from my other writing straight away. I had it finished in two months. Then came the hard part; finding an agent and a publisher.”

Who is Sandra Harris?

In Another Life: “I’d still be writing, but my hair would be naturally straight.”

Favourite Writers: Marian Keyes; Stephen King; The Brontës; Bram Stoker; EL James. “I admire her for having three books out at once.”

Top Tip: “Just write, already. You’re not getting any younger. If you wait for permission, or until your life is serene, it won’t happen.”

These thirteen, skilfully linked stories about a diverse group of characters covers a whole range of issues, from autism to institutional abuse, taking in a raft of, mostly bad, relationships into the mix.

The Verdict: A clever idea, well carried out.

Published in The Irish Examiner on 29th August.