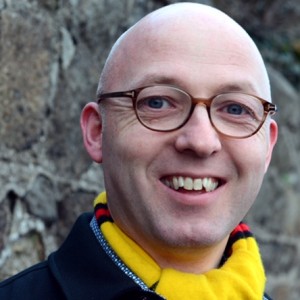 Rónán discovered books when he read his way through the Intercert list. He wrote poetry, and articles for the school magazine, but from his mid-teens became immersed in music.

“I released three albums as Mumblin’ Deaf Ro, and I ran a small record label.”

Meanwhile he worked in the Civil Service. In 2012, with the birth of his children, he stepped away from music, but after a few years, realised he needed creativity in his life.

“That led me towards writing. Leonard and Hungry Paul, started in 2017, is the first thing I wrote. I never took a creative writing course. Reading taught me to write.

“It was as if I was pregnant with Leonard. I got a sense of him as he was going through a melancholic phase. I kept noticing people like him, who, when you get to know them, have deep characteristics. The friendship with Hungry Paul was a way of balancing him out. Hungry Paul doesn’t care about fitting in.”

Who is Rónán Hession?

The Day Job: A Civil Servant, working in the Department of Social Protection.

In Another Life: “I’d live abroad and be the outsider; I’d rewire my brain in a different language.”

Top Tip: “Look at your characters as if you’re a casting director who has procured the best actors, and be careful not to upstage them. They mustn’t be absent from the story for too long.”

Leonard and Hungry Paul are friends, in their thirties, who view life rather differently. Leonard ghost-writes encyclopaedias; Hungry Paul, comfortable with silence, embodies mindfulness. When Leonard seems ready to move on, will Hungry Paul get left behind?

“It can seem that there’s no kindness in the world, but it’s often expressed in private. Kindness is a huge, unrecognised force in society.”

The Verdict: I adored this quiet, contemplative novel. It’s my debut of the year.

Published in The Irish Examiner on 28th December.