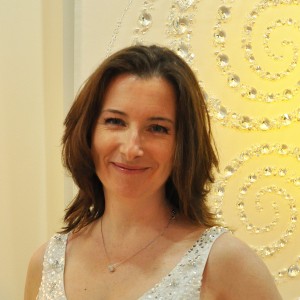 Graduating with a business degree, Róisín worked for the European Commission; then after taking a Masters, moved to London and worked at the European Bank. When she contracted the illness ME – she was forced to give up work; then recovering, she trained, and then worked as a homeopath.

Then Róisín had a brain haemorrhage which resulted in a near death experience, and that transformed her life view.

“I felt a pure sense of blissful love, and the eternal light,” she says. “And that sense of bliss remained with me.  I know the deepest truth of who I am and who everyone else is, and it has made my life so simple.”

In order to share her sense of the light, Róisín became an artist, and is now internationally known.

Who is Róisín Fitzpatrick

Home: Róisín lives on the seafront in Bray, in County Wicklow.

The Day Job: Artist of the Light. “I sew clear crystals onto silk.” Constantly exhibiting both sides of the Atlantic.

Favourite Writers: “There are two books that I love. Marianne Williamson’s A Return to Love, and The Seat of the Soul by Gary Zukav.

Second Novel: “There will be a second; it will go deeper into the subject of eternal light.”

Top Writing Tip: Keep the passion; and be sure to make the writing accessible to the reader.

Róisín recounts her life up to, and after the brain haemorrhage and the near death experience that followed.  It led to her belief that Heaven lies within each of us, and that we can always be at one with the eternal life.

The second part, provides an inspirational guide to show people how to connect with the life within.

“There is such fear around death, and near death experience is a challenging subject.  I wanted to demystify it, and encourage people to live their best lives.”

The Verdict: An inspirational guide for those who are interested in spirituality.