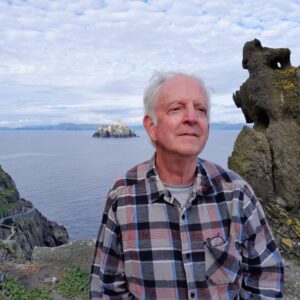 Robert’s American parents moved around a lot when he was a child. And he hasn’t lived in America since going to Edinburgh in the late 1970’s to take a postgraduate degree. His wife is from Kerry – the couple moved to Ireland in 1980 and have stayed.

For the past 34 years Robert has been a caretake on Skellig Michael.

“That has afforded me a unique perspective,” he says. I’ve been writing journals since I arrived there and have had small pieces published here and there.”

Deciding to write a book, Robert’s challenge was to transform his journal entries into something that others would enjoy.

“I was trying to do something concise, and to hone expressions,” he says.

Who is Robert L. Harris?

Home: From May to October, Skellig Michael. Winter months in Leitrim.

The Day Job: Supervisor guide, and warden in a team of 5, monitoring the island.

In Another Life: “I’d be an orchestral conductor.”

Second Novel: “I’d like to write a novel and I have a lot of ideas in my head. My wife says I’m always telling stories.”

Top Tip: “Be absolutely honest with yourself. If you feel you need to do it, do it. Don’t be cowed by the prospect.”

In 1987, answering an advert in the Kerryman, Robert L Harris became one of the original team of wardens on Skellig Michael – a job he still holds today. In this magical book, he transports the reader to this otherworldly island. He describes the beauty and harshness of nature which can become a threat to life, and how he readjusted to the isolation he found there.

He ruminates on how such seclusion brings a full engagement with wildlife, and with the ancient past. This ultimately leads him to a sense of belonging.

Published in the Irish Examiner on 20th November.