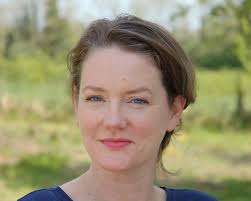 Brought up in County Cavan, Rebecca initially wanted to study medicine, but she decided on English, and worked in various jobs in London whilst taking her MA.

“Afterwards, I got a job as a general assistant at a literary agency in London. I stayed for a year, then moved to the Oxford University Press as an editor in the trade department, in non-fiction and in Oxford Classics. That’s when I wrote my debut novel.”

After a few years in Oxford, Rebecca moved back to London as commissioning editor for Saqi Books. She wrote a second book, and in 2006, met her husband, Will, an artist. They moved back to Ireland two years later after their elder son was born.

“I worked as a freelance editor whilst Will painted and looked after Bruce. Then we set up Moth, concentrating, first, on the poetry prize sponsored by Ballymaloe.”

Her debut poetry collection was shortlisted for the Strong Shine Award.

In 2016, Will read the debut Rebecca had written all those years ago, and suggested she revise it. She then gained agent Caroline Michel, and two months later, she secured a deal.

Who is Rebecca O’Connor.

The Day Job: Editor of Moth

In Another Life: “I’d love to be a doctor. And recently I took up song writing. That would be a lovely career.”

Top Tip: “Give wholly of yourself; hold nothing back; then edit like a mad thing.”

It’s 1990’s Ireland, and at 15, Lani Devine falls in love with the mysterious Liam Brady, who is grieving for his mother. As she grapples with intense emotions, she’s haunted by the stories of 35 orphaned girls buried locally, in an unmarked grave.

The Verdict: Quite brilliant! The most accurate evocation of teenage angst I have ever read.

Published on 16th June in The Irish Examiner.