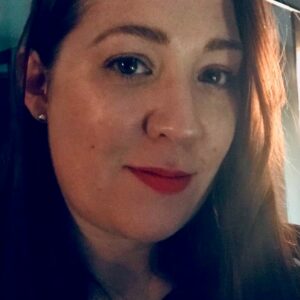 After studying history at university, Olivia went to London and worked as a business manager in advertising. After two years, moving to Dublin, she took an MA in Film.

“I met my husband there, and stayed in Dublin, working on film production. I was always tapping away writing short films. But when Milo was born, I became a stay-at-home Mum.”

When a friend told her about a short story competition, she typed one up on her phone, sent it off and was shortlisted.

“I realised I loved it and wrote bits of flash fiction when the kids were little. And I took a few writer’s courses at the Irish Writer’s Centre, and then did the six-month course at the Stinging Fly.”

“The IWC has always supported me. I was on their Evolution programme, and got to teach creative writing in NUI, Galway.”

Who is Olivia Fitzsimons?

The Day Job: “I work as a screenwriter, and in film development, with our company, Greenhorn Films. I’ve screenplays in development.”

Second Novel: “It’s about grief, and how people cope differently. I’ve won a bursary to go to Paris and work in it.”

Top Tip: “Own it. If you’re doing the work, give yourself permission to call yourself a writer.”

Sam Malin’s mother left when she was small. Now, in her last year at school, fighting with her dad, she, too, longs to flee Northern Ireland. Meanwhile, escaping through music and drugs, she’s obsessed with an erratic older man. But he has a secret.

The Verdict: I loved this! A wise, universal, coming of age story it shows, brilliantly, how desire can eliminate sense. Sam is an unforgettable character.

Published in the Irish Examiner on 16th April.