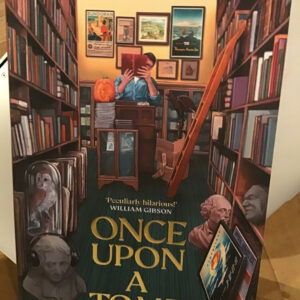 Oliver describes his childhood as very nerdy. He loved books. As a teenager he developed narcolepsy, but it remained undiagnosed.

“I would fall asleep anywhere,” he says, explaining that his condition affected his exam results, and meant that he missed out on a place at university.

“After school, I wallowed, and at first did nothing much. Then I tried a few jobs, including in a law firm, but I never lasted long. It took me too long to perform tasks.”

At 21, he accepted an apprenticeship with the antiquarian bookstore, Henry Sotheran on Sackville Street in London.

“I was comfortable there,” he says. “Nobody bothered me, because you were trusted to get things done in your own time.”

For all that, he still kept falling asleep, and finally accepting that there was definitely something wrong, Oliver attained his diagnosis.

“There’s no cure for narcolepsy,” he says, “but I take a drug which keep me more awake and allows me to have a normal life.”

“It took off, and became its own creature,” he says. “An agent contacted me and suggested a book. I felt a fraud to be asked, but writing it felt natural.”

The Day Job: “I still work at Sotheran’s on a part-time basis, and I freelance here and there.”

In Another Life: “I’d be living in a hole in the ground like a hobbit.”

Second Book: “There will be another book, but I’m not sure what it will be yet. My agent will decide.”

Top Tip: “Break it down to stages – a book seems too intimidating otherwise. And give yourself short deadlines.”

When Oliver Darkshire starts his apprenticeship at Sotheran’s Antiquarian bookstore, he’s not only surrounded by dusty piles of literary delights – there’s a rich quirkiness amongst his colleagues and customers too.

The Verdict: A book lover’s delight! Innumerable tales about the delightfully eccentric world to be found behind the bookshelves.

Published in the Irish Examiner on 15th October.