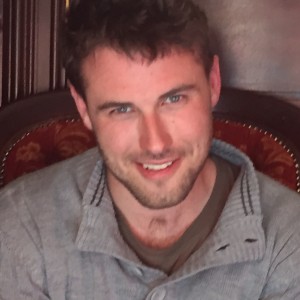 A writer since childhood, Oisín published his first short story at 18.

“I dropped out of college for a year and wrote fulltime working nights. Then I went back to complete my course.”

As a teenager, he says, writing was full of joy.

“But I’ve been writing seriously now for maybe seven or eight years, and at each stage I’ve started asking more questions and become more aware of the literary world around me.”

Oisín had a story in the anthology, Young Irelanders; he’s had a podcast featured in The Irish Museum of Modern Art and has won the inaugural Penny Dreadful novella prize. His first collection of short stories, Hostages, came out in 2016 to high acclaim.

He finds Ireland a great place to be a writer.

“It’s friendly and helpful. I’ve had great support from writers like Colin Barrett, Tom Morris, Nicole Flattery and Sally Rooney, but in the end you’re on your own with your stuff.”

The Day Job: “I teach English as a Foreign Language in the mornings and write in the afternoons.”

In Another Life: “I’d be somewhere sunnier. That would have a huge impact on my quality of life.”

Second Novel: “I’m working on something, and am at the stage where I’m looking for a reason to stop.”

Top Tip: “Have faith. There are times when you can’t see your way forwards and faith is the only thing that will get you through.”

When Osprey de Flunkl and his followers approach Nobber, a fictitious town in County Meath, they expect to profiteer. It’s Summer, 1348, and the plague has ravaged Ireland. But they hadn’t reckoned with the marauding Gaels or the town’s remaining inhabitants. Soon, a standoff ensues.

“It’s a mixture of historical and dystopian. I stuck to my vision of the world and didn’t write a compromise book.”

The Verdict: Oisín is a true original. Nobber is brilliant, innovative, relevant, zany, and highly readable.

Published in The Irish Examiner, on 10th August