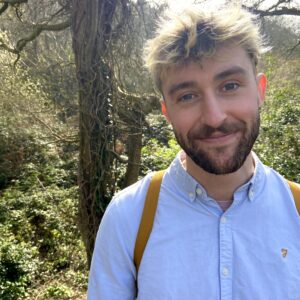 The youngest of three, Nick has always been interested in illustration.

“I was always drawing. At the beginning, I’d copy the characters from my comic books, and when I was 7 or 8, I wrote stories about detectives and space.”

As a teenager who loved music and movies, he became more interested in the narrative of a story.

“That’s when I started writing a bit more – but my main focus was still illustration.”

Nick repeated his final year at college, and worked at Wetherspoon’s pub. He continued working there until the pandemic hit.

The idea for knot of toads came in his second year at college, when he was doing a project based on collective nouns.

“I decided to use animals and direct the project at children,” he says. “I ended up failing the project, but I’d thought it was a fun idea, and, during lockdown I decided to build on it.”

He was living at home at the time, and his Mum, the poet/publisher Alison Hackett came on board, and, along with Arnie Yasinski, wrote some haikus to enhance the text.

Who is Nick Geoghegan?

Home: Dublin City Centre. “I share with friends from school.”

Family: Girlfriend, Blánaid. “We met during the lockdown”.

The Day Job: Paid leave. Taking a break from creative things, to decide direction and build a portfolio. “But if I could work on a graphic novel fulltime, that would be amazing.”

In Another Life: A footballer. “I’ve always been football crazy. I played seriously until I was 22.”

Top Tip: The hardest thing is starting. Get something on the page, and it all becomes easier.

Nick interpretated these collective nouns literally – showing camels in a caravan, lizards on, sun lounges, fish in front of a blackboard, and gorillas playing in a band. With the resulting humour – and accompanying Haikus, adults can enjoy this too.

The Verdict: This beautiful picture, with stunning, painterly illustrations, is educational for small children, but also great fun.

Published in The Irish Examiner on 24th April