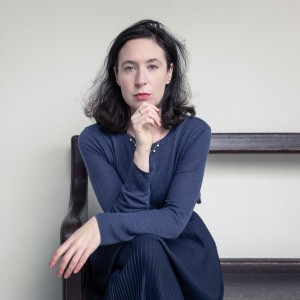 At 7, Niamh asked for a real typewriter for Christmas.

“I paid for my own ribbons and had to conserve ink. I’ve always known I’d be a writer, but it’s hard to write well. It took me until my late twenties.”

“It felt like home. When I’d finished my Masters, the recession hit, and there was no work. I went to London for four years, to take a PhD, but I was lonely. I worked sporadically as a receptionist, and then a teacher, but sometimes I hadn’t the money for the bus fare.”

In 2015, returning, she signed on, then got a clerical job in the civil service.

“I was paid so little, and I hated it. I’d broken off a relationship and was in a wall of depression. I started creative writing to get out of that.”

Gaining a burst of confidence on a receiving a ‘Next generation,’ bursary from the Arts Council, Niamh quit her job, wrote her novel, and took a post-doc.

“Then I did some teaching before going back on the dole.”

Niamh has published a monograph on John McGahern, and her stories and essays have appeared in The Dublin Review, Gorse, and other literary journals.

Who is Niamh Campbell?

The Day Job: Teaching on causal basis, and looking for academic work.

In Another Life: “I’d be a dancer giving solo shows.”

Second Novel: “I’m working on it.”

Top Tip: “Talent is not enough. You need to work.”

Alannah, when newly married, sees her landlady from six years before – when she was living in rural Ireland with a married man. This sparks memories. Moving between these two periods, Alannah examiners her actions and feelings.

“I used my own experience of being an educated woman in a culture that had no use for me. And the volatility that comes with romantic freedom.”

The Verdict: I adored this!  It’s clever, deeply absorbing, and utterly satisfying.