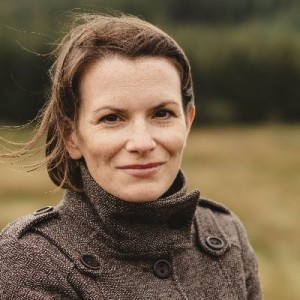 As a child Michelle wanted to be an artist and live in her parent’s attic, but she failed to get into art college. A child of the troubles, Michelle won quite a few short story and poetry awards as a teenager, so she switched her allegiance to English.

After her MA, Michelle worked in London as a financial copywriter, but she contracted auto Immune encephalitis, ending up unable to walk or talk.

“I lived at home for a year, then moved to Dublin and got rehab jobs as my gateway back to work.”

In 2002, Michelle moved to Northern Ireland, working in technology for the BBC, then as a freelance. She married in Paris, living there for three months before moving back to London in 2010.

“Life was all about tech. I was working on my own start-up apps, and trying to get buzz going.”

Who is Michelle Gallen?

The Day Job: Freelance in technology.

In Another Life: “I love improvisation.”

Working in a chipper, Majella is considered ‘different.’ She hates being noticed. Its tough enough dealing with her mum, after her dad’s disappearance, but when her grandmother is murdered, she becomes the centre of small-town gossip.

“I started writing this when I was living in a loyalist enclave, 10 years after the ceasefire. Everything had changed. It was the troubles that made Northern Ireland special; the media now felt it was all fine, but there was a lot unresolved.”

The Verdict: Superb. A real insight into those, in the North, who, disinterested in politics, simply want a normal life.

Published in The Irish Examiner on 22nd February.