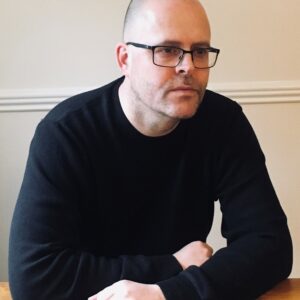 Mel became interested in writing when he was introduced to the novels of Thomas Hardy– but he was in his late twenties when he decided to take action.

“I joined a writing course run in University College Cork, that took place once a week. I learned the technique but had trouble finding my voice.”

Writing around his job as an English teacher, he eventually penned half a novel – but didn’t see a way to finish it.

“Then in 2014, my wife and I were walking through the grounds of Bessborough, and she said, ‘Why don’t you write about this place.’ I started the next morning,” he says, “and wrote the first few paragraphs.”

Writing in early mornings and evenings, it took him 4 or 5 years to write the novel. This included prodigious research.

“The characters and descriptions had to be realistic and true,” he says.

Eventually, he took time off work to dedicate himself to the novel.

“I sent the first draft to the agent, Brian Langan, and he was interested. Then I took out all the notes I’d had for short stories and completed several. I was shortlisted for the Francis McManus Award and the Seán O’Faoláin Award and longlisted for The Sunday Times Award.”

Who is Mel O’Doherty?

The Day Job: “Fulltime Writer – but I may go back to teaching.”

In Another Life: “I’d love to be the next Bruce Springsteen.”

Second Novel: “It’s about a Cork Jewish generation and is more autobiographical than Fallen.”

Top Tip: Keep Reading, and if you’re not sure where the novel is going, take 2 months off between chapters.”

When Michael was a child, his mother Elaine was committed – pronounced delusional – because she constantly talked about the cruel regime in Bessborough Mother and Baby home. Nobody believed her. Decades later, the truth out, Michael and his Dad are floundering with guilt.

The Verdict: A powerful depiction of the impact of Ireland’s shameful history.

Published in the Irish Examiner on 7th August