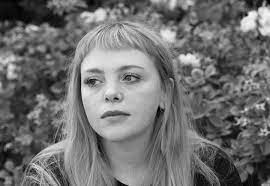 Megan was a bookish child from an artistic background.

“My father was a playwright and theatre director,” she says. “He founded Red Kettle Theatre Company. I had social anxiety, so I buried myself in books because that was easier than having to chat.”

After dropping out of college, Megan did a raft of temporary jobs in retail, waitressing, and as stage manager for a youth drama production.

“Then I moved to London,” she says. “And that’s when I started to write seriously.”

She quickly became a successful freelance writer, penning reviews, fiction and personal essays, published in The New York Times, The Sunday Times, The Guardian, and The Winter Pages amongst others.

The agent Harriet Moore approached Megan suggesting she should write a book.

“At that stage we were considering essays or long form non-fiction. The idea was of losing your identity to romance, but when I tried to commit to that, I realised I wanted to make a story of it rather than non-fiction.  I started the novel in 2016. It took me three years to complete the first draft.”

Since getting her two-book deal in 2019, Megan has been able to write fulltime.

Who is Megan Nolan?

Education:  Saint Angela’s Ursuline Convent, Waterford. Trinity College Dublin. “I failed to get the points for English and studied French and Film Studies instead. I dropped out after 3 or 4 months.”

The Day Job: Journalist, with a column in the New Statesman.

In Another Life: “I have a huge envy of friends who travel with their bands.”

Top Tip: “Find someone you trust to share your writing with.”

When the unnamed narrator, a Trinity dropout, meets Ciaran in Dublin, she is blown away by his beauty. Obsessed, despite his coldness towards her, she stays with him, as his aloofness turns into something darker.

“The romance is fictional, but the feelings are real.”

Published in the Irish Examiner on 26th June.