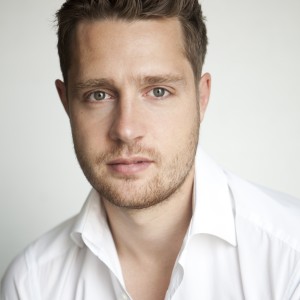 Max got into writing at university.

“My confidence to write came through other things,” he says. “I got into performing sketch and stand-up comedy. I loved that idea of taking something and performing it, and getting feedback from an audience. It felt great.”

He started his working life as a professional radio DJ on Absolute Radio. He was nominated for a coveted Sony Award.

Moving into stand-up comedy, he has since performed three solo shows, including My Groupon Adventure – the show which led to his debut.

“Writing a book felt like a natural progression. It felt a more intimate and authentic thing. The show, by its nature, has to be more punchy and gaggy.”

Recently Max has expanded into playwriting. ‘The Trunk,’ his one man show, was a critical hit at the Edinburgh Festival this year.

Who is Max Dickins

Second Novel: World Champion. “I’ve got to become a world champion in something in the next year, before my 30th birthday. It will probably be for something obscure like wife carrying.”

Top Tip: “Don’t judge your ability on the first draft. You deserve oscillation between thinking you are a genius, and believing you are rubbish. The secret is to write 1,000 drafts.”

When Max was dumped by his girlfriend he felt rootless. He was also bored. Deciding it was time to try something new, he bought a deal on Groupon. And then another one. Before he knew it, Groupon became an addiction. In one of the most zany challenges, he wrestled with a crocodile.

By the end of the 18 months, his life enhanced, Max’s had met someone new.

“The process of writing is about self-discovery. The book is about the oxygenating effect of taking on new experiences.”

The Verdict: This is more than just a funny account of a madcap challenge; coming from an authentic experience, it is full of heart.

Published by The Irish Examiner on 17th December