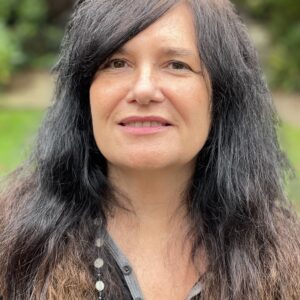 Graduating, she moved to Camden Town, London, and co-founded the theatre company, Trouble and Strife.

“Later, living in King’s Cross, I moved to film and made a short.”

Then in 1997, working with Ken Loach, she worked on a film set in Soho.

“Then I moved to Wicklow and started a production company. I shot Silent Grace in Kilmainham Gaol. It represented the UK for Cannes, and in 2020 was listed at number 38 in The Irish Times, 50 best Irish Films Ever Made.”

She wrote and directed two more feature films, Beyond the Fire and Taking Stock, and three more shorts.

Maeve wrote the first part of Christmas at the Cross as a short story. Included in an anthology, it was published in the Irish Times in 2019. (And the second part in 2020.)

“That gave me real confidence. And when the Covid chaos happened and film ground to a halt, I thought, “I can extend this. I’ve got time. And I loved it! In film you discover characters from what they do; in novels it’s the other way round. I love writing the interior voice.”

Who is Maeve Murphy?

In Another Life: “I’d love to travel. There’s so much of the world I haven’t seen. I’d love to go to Africa and South America.”

Second Novel: “I have an idea for another.”

Blaithnaid’s life is a mess. Her boyfriend Kieran rapes her, and, in distress, she befriends a prostitute, Nadina, and finds solace through a neighbour, David. But can the violent community of King’s Cross find peace at Christmas?

“Writing in lockdown helped me create that sense of fear and strong community.”

The Verdict: A perfect Christmas tale. Full of insight and heart.

Published in the Irish Examiner on 4th December.