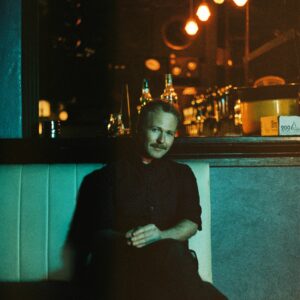 Luke has always been drawn to books – but he was discouraged from taking English at university. After his MA, he spent a year in Japan teaching English, and on the way home, travelling overland, he stopped in Paris to see friends he had met during an Erasmus.

“They persuaded me to stay, and I ended up spending four years there. I worked freelance as a cultural spotter for a research agency.”

In 2017, following a PhD, Luke returned to Dundalk, and saw the place he had grown up with new eyes.

“I didn’t set out to write a novel set in Dundalk,” he says. “It started in a workshop with free writing. This voice emerged. I followed it in a stream of consciousness way.”

Iron Annie has also sold to North America, and is in development with TV company, World Productions.

“I’m taking a Cabaret tour – with spoken words and music to 19 theatre venues between October and next March.”

Who is Luke Cassidy?

Family: “I’m in a relationship.”

Second Novel: “It’s set in the same underworld, but focuses on The Rat King.”

Top Tip: “Years ago, I was meeting my aunt in a London hotel, and Leonard Cohen was there. I asked him for writing advice, and he wrote, ‘Hang in there, keep going.’

When Aoife meets Annie in Dundalk’s underworld, she is entranced. Her desire to learn more about her becomes a need and then an obsession. When the Rat King asks Aoife to dispose of ten kilos of cocaine, she takes Annie along for the road trip.

The Verdict: Absolutely brilliant! Fizzes with energy – and with raunchiness, colour, beauty and insight.

Published in the Irish Examiner on 28th August.