Posted by Sue Leonard on Wednesday 5th May 2021 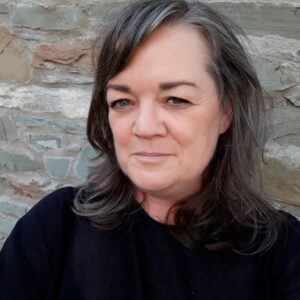 An avid reader, devouring 3 or 4 books each week, Louise didn’t start writing until 2014.

“My creativity was knocked out of me in secondary school,” she says.

Louise worked at FAS, then moved to London and worked for an American Merchant Bank.

“After a year I went home, did a Cordon Bleu cookery course, and ran restaurants for 28 years.” Mainly in Dublin, she spent three years as a private chef in Beirut.  “Then I was sent to Sligo to open a kitchen. I met someone in a pub, and quickly ended up with a husband, two children and a mortgage. I worked part-time in the public library.”

She joined a writing group to please a friend.

“As soon as I started writing, I didn’t want to do anything else.”

Within a year she’d won two competitions and gained many short listings. Her stories have been published in The Stinging Fly, Banshee and Tangerine.

“London agent, Eleanor Byrne saw one, and contacted me through Queens.”

Meanwhile, Louise had radical surgery for melanoma, and in recovery, wrote the first draft of a novel. Eleanor sent the stories and proposal for the novel out on the eve of the ceremony for the Sunday Times Audible prize in 2019. Louise had been shortlisted.

“Two weeks later there was a nine-way auction,” says Louise. “I got a really good deal.”

Who is Louise Kennedy?

In Another Life: “I’d like to have been a jazz singer.”

Second Book: “It’s a novel about a schoolteacher and is set in the North in 1975.”

Whether talking of grief, guilt, betrayal or fear, these extraordinary, visceral stories show beleaguered women dealing with various difficulties. The stories are shocking, yet beautiful; harsh yet humorous.

The Verdict: Breath-taking. A literary star is born!

Published in the Irish Examiner on 10th April.