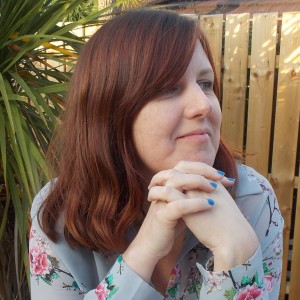 After college Kelly worked in a special school, then she worked with adults who had learning difficulties. Once her four children were born, she trained as an arts facilitator, and though she was interested in writing, visual work came more easily to her.

Gradually, she gained confidence in her writing, submitting to journals, with occasional acceptances to keep her going.

“I began with poems, then discovered my love for short stories,” she says.

Runner up for the Michael McLaverty Short Story Award, she has been shortlisted in several prestigious competitions, and has been widely published.

“It’s a learning process,” she says. She wrote one, unsuccessful novel before finding her voice. “I felt possessed by Scott McAuley,” she says of her antihero.”I wrote a first draft, then left the novel. Then I kept going back to redraft and redraft. I took a lot of breaks to write stories and poetry.”

The Day Job: “I do casual workshop facilitation, and I edit The Incubator, a literary journal.”

Interests: “Anything creative; baking with the kids, gardening, and art.”

Second Novel: “I’m working on one. It’s more of a police procedural novel.”

Top Writing Tip: “Don’t be afraid to put the novel aside for a while. Getting back to it with a fresh eye is helpful.”

Scott McAuley is thrown out of university in England, and returns to County Down where he finds work in a garden centre. Clearly intelligent, he can’t get on with his father, a reformed Republican murderer.

The events of a year are told through Scott’s diary entries, and it soon becomes clear that he is far from a reliable narrator.

“If someone tells me they had compassion for Scott, I will feel I’ve done a good job.”

The Verdict: Compelling, compulsive, compassionate, yet creepy and chilling.