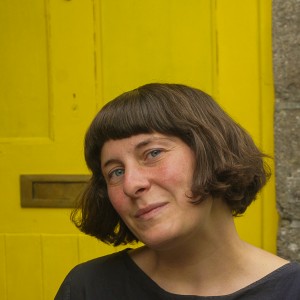 Kerri started writing a journal, aged 5, and she has been writing one ever since. After a trauma filled childhood in Derry, (Kerri’s family was burnt out, then hounded out,) followed by University in Dublin, Kerri worked in Cork, moved back to Dublin, and then to Derry.

“I worked for BT, for a charity, and I waitressed. I was saving to go away. Then I moved to Edinburgh.”

Returning to Derry, her partner and she ran a vegan and vegetarian café, Cowbog, in Derry, for almost two years.

“I wrote the book while we ran the café.  It started out as a children’s story, then shapeshifted into political essays. The essays were shortlisted for some prizes, then, when going through therapy, I realised the book should be a memoir. I sold it in April 2019 and finished it that August.

“I had to write it,” she says. “I wrote through trauma. I felt as if a creature was living inside me, clawing to get out.

“Having written this book, I now feel free to write all the other stuff I’ve wanted to write. It’s cleared the way.”

Who is Kerri ní Dochartaigh?

Home: West Meath. In a railway cottage on a line that connected the North with the South. “We moved here in December 2019.”

Family: Partner and dog. “I’m pregnant with my first child.”

In Another Life: “I’d be a gardener a Victorian walled garden.”

Second Novel: “It’s creative non-fiction, but is a quieter book, about womanhood, the natural world and time.”

Top Tip: “Write every single day, only if it’s only a sentence. And remember that a lot of work happens when you’re dancing, swimming or walking.”

In a mixture of memoir, history and nature writing, Kerri chronicles her troubled life, showing the juxtaposition between violence and hope, and explores how nature has helped her to heal.

The Verdict:  A powerful, lyrical narrative showing the human horror of the troubles.

Published in the Irish Examiner on 7th February.