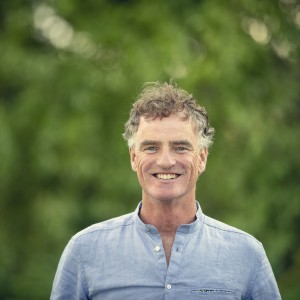 Spending all his childhood summers, fishing, on Fenit Island, Ken has always felt at one with the sea.

“I connected with it; with the seasons and the tide.”

He also loved music. And when he left college he went to New York with his band, convinced they would be the next U2, but it wasn’t to be.

“I drove a van, moved furniture and swept the streets,” he says.

Then in London, he worked in the city, determined to make a go of it, but County Clare called. And back home, Ken spent time scuba diving, snorkelling and surfing.

“I love getting into the sea, seeing animals, and telling stories,” he says. “I saw the beautiful underworld and marvelled at the idea of being able to document it. I bought a camera and taught myself how to be an underwater cameraman.”

In 2006, he founded Sea Fever Productions, and, travelling the world, has since produced fourteen documentaries, including RTE’s 1918 production, Ireland’s Deep Atlantic.

“I wrote poetry as a teenager and have sporadically had stories published in various magazines. I wrote most of the book last November and December; it’s a good season for reflection.”

Who is Ken O’Sullivan?

In Another Life: “I’d be a fulltime musician.”

Second Book: “I hope there will be a second one, but I’m currently focusing on a new Ocean documentary series.

Top Tip: Write from the heart.

Ken’s passion for the sea comes shining through this memoir, which details his childhood, his travels, and his adventures as an underwater cameraman. He recounts his time swimming with sharks and whales; he marvels at the beauty of jellyfish, and he dices with death as he films storms, but the environmental challenges we face are always uppermost in his mind. The text is interspersed with photographs, and the author’s poems.

Published in The Irish Examiner on 9th November.