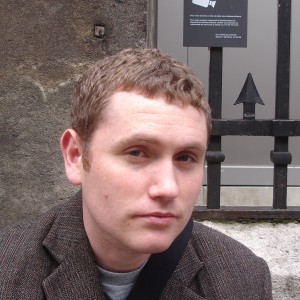 Whilst at UCD Karl wrote for university papers, and afterwards he did some freelance journalism for The Guardian and the Irish Times.
“My articles were often about Dublin. I wanted to write something from a new perspective reflecting the city a bit more.”

In 2002, studying modernism and the University of East Anglia.
“That’s where I began thinking about writing. Mixing with the creative writers, the seminars on criticism stuck with me. I was influenced by narrative non-fiction published in the New Yorker.”

Karl worked in various jobs, teaching as part of his PhD, and working as a researcher at South Dublin library. He started working on the book in 2010, and the following year sent a proposal to publishers and agents.

“I had no response, so I sent a section to Brendan Barrington, an editor at Penguin Ireland who also edits the Dublin Review. I wrote several articles for the Dublin Review, then Brendan asked for a book proposal.”

Who Is Karl Whitney?

The Day Job: Writing; and teaching An Introduction to Literature at Sunderland University.

Second Book: I’m thinking of one, trying to discern if its to be based single place or more travel based.

Top Writing Tip: Be persistent, and keep it to yourself in the early stages. Early criticism may not be useful. It can put you off. Believe in what you’re doing, becoming good takes time.

Travelling around Dublin by bus, tram, bicycle and on foot, Karl seeks out secret places and untold stories. He follows Joyce – searching for all his addresses; he looks at deprived areas, at the suburbs and he goes underground in the Liberties. The reader journeys with him, seeing Dublin’s heritage in a new way.

The Verdict: An inspirational book; one to use as a guide, savour and reread