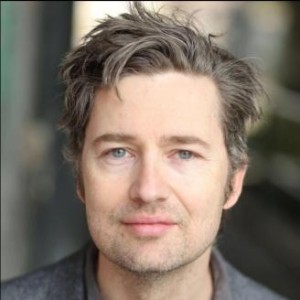 A dyslexic, who was terrified of books, Karl left school without exams. Leaving Dublin for New York at 16, he started reading, loving the vibrant arts scene in East Village.

“When you need to fill gaps in your education, you over-compensate,” he says. “I became voracious about books.”

He wrote his first novel at 22. It didn’t work, but the dialogue was good, and it was turned into a successful screenplay. He ran cafes and music spots, and, at 20, became an actor.

“A friend was making a vampire film – a love poem to Bram Stoker – and wanted someone from Dublin in it.”  (Credits include Michael Almereyda’s Hamlet, and Ken Loach’s Jimmy Hall.)  He recently directed Dorothy Parker’s You Were Perfectly Fine, for the screen.

“I started several novels but I could not sustain them.”

Who is Karl Geary

Interests: Going to the races.

Second Novel: “I’m working on something, exploring the idea of exile.”

Top Tip: “Allocate yourself a time to write, and leave the table when that time is up. Then there is something in the tank for tomorrow.”

Sonny’s life is stymied. There’s no money, and there’s war in his house. He’s isolated at school, where he’s a charity case; his job at the butcher’s shop is going nowhere, and he has nothing in common with Sharon, his only friend.

Then one day, working with his father, he meets Vera. The solitary English woman, living alone in the large slightly dilapidated house in Dublin’s Montpelier Parade captures Sonny’s imagination. She’s beautiful and elusive, and Sonny is determined to get to know her better. Gradually, he inveigles himself into her life, and she responds to him. But who exactly is Vera, and what is she hiding from the boy?

The Verdict: I adored this unconventional love story. It’s tender, with luminous language, and should catapult the author to literary fame.