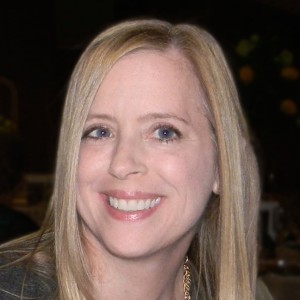 Karen started writing books at 7, but by 18, as the plots got complicated, she couldn’t finish anything, and gave up.

She worked in Washington DC, for a political consulting firm. After three years, married, she returned to Boston.

Her husband, Jim, died when their son was a toddler.

“I started writing again, because there were so many things Jim didn’t get to do. I thought, it will be a shame if I don’t go back to this thing that I love.”

She wrote a novel influenced by the Hunger Games. It was turned down by agents, as was a second fantasy book, and she realised a contemporary setting suited her style better.

“I wrote it in two months, and revised it for another two. One weekend I wrote 10,000 words. It just flowed.”

Her dream agent, Rosemary Stimola, snapped up the book, selling it within two weeks. It now has twenty foreign deals.

Who is Karen McManus

Date of birth: 1969 near Boston, Massachusetts.

The Day Job: In Marketing, helping to launch products.

In Another Life: “I’d be a pop singer. I always wished I could sing, or play an instrument. But I can’t.”

Second Novel: “It’s another stand-alone YA suspense thriller. I’ve finished a draft. It’s to be released in 2018.”

Top Tip: “Find other writers. I joined online writer’s groups, exchanging work with others. I learned the process of writing, and the flaws in my own writing, and gained good friends too.  That changed everything for me.”

Five teenagers walk into detention; only four leave alive. How, and why, was the fifth, Simon, killed? As the clues and red-herrings mount up, and the four, unlikely suspects bond together, they change, and learn acceptance; that of others, and of themselves.

The Verdict: Stunning! The best grip-lit debut I’ve read in years – YA or adult. The characters drive the plot.

Published in The Irish Examiner on 16th September 2017