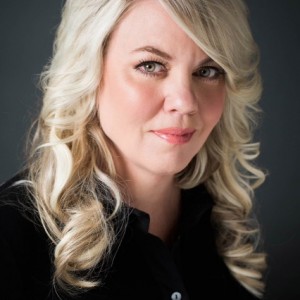 A Canadian, Kimberley’s family moved around the world while she was growing up – to Africa, the Middle East, Puerto Rico and Europe.

“I started reading at two, but didn’t write until my late twenties. When I read David Morrell’s The Brotherhood of the Rose, I thought, ‘If I could write a book which would make the reader escape like I have in this book, it will be a dream come true.’”

At the time, Kimberley was working in computer consulting, but she wasn’t enjoying it so she switched careers and became a medical writer.

“It was a great job and it honed my craft in a different way.”

Meanwhile, she had taken many courses in writing, had written a novel which remains in a drawer, and won a few awards. And she became the Executive Director of ThrillerFest.

The Day Job: “I gave up medical writing when the fiction took off. I’ve been Executive Director of Thriller-Fest for 8 or 9 years. 1,000 thriller writers attend.”

In Another Life:  “I’d have been an actress, or perhaps a psychologist.”

Second Novel: It’s about a skyjack. Thea and Rif are there, and several new characters.

Top Tip: “Embrace criticism from incredible sources. I’ve benefitted so much from the advice of others.”

Daughter of a billionaire, Thea Paris heads a team of freedom brokers – rescuing those who have been kidnapped. Smart and fearless, she’s floored when her father is kidnapped. Can she save him? And will her brother – who was, himself, kidnapped as a child help her? There’s all to play for.

“I did lots of research for the book, because I really wanted to get it right. It’s a book about family; the ones you love the most can also hurt you the most.”

The Verdict: An excellent thriller. Impeccably researched; with feisty female characters and a loyal Ridgeback dog.

Published in The Irish Examiner on 26th August.