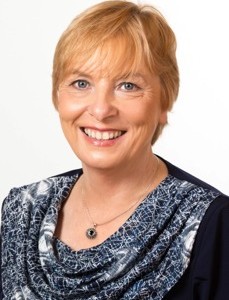 After school Joan worked in various jobs, as a secretary, and a barmaid, then, taking a course in journalism, she scooped a job with Independent Newspapers.

“I wrote features in The Irish Independent and The Evening Herald, and had a column called, The Bottom Line.”

When her daughter started school, Joan freelanced, working for various papers and magazines. Then in 1995, she joined RTE as a researcher.

“I was there for 15 years, working on programmes including the Gay Byrne Show, then I became a producer for Kenny Live, The Late Debate and Drivetime.  After that, I was a TV researcher on Would you Believe.”

“I was, already, writing fiction on and off. I’d start novels, and write three chapters, then hit a cul de sac.”

A course on finishing a novel at The Irish Writer’s Centre changed all that. Learning to write new words every week, rather than make the first chapters perfect, Joan wrote her debut, self-publishing it on Kindle before finding agent Tracy Brennan and securing her deal. She has now finished her second book, and is mulling through ideas for a third.

Who is Joan Brady?

Date of birth: In her fifties; born in Dublin.

Family: Husband Dave, daughter Jane, married to Darren, with a baby due in June.

The Day Job: Writer and journalist.

Favourite Writers: “I read a lot of self-development books. Also novels, but I’ve no particular favourites.”

Second Novel: Reinventing Susannah. “It’s about an older woman who goes back into a career as a journalist.”

Tess works for Helene at a local radio station that may now go national. It’s tough dealing with the demands of presenter Ollie Andrews, and Tess messes up her chance to present an agony aunt spot. She dreams of being swept away by a Prince Charming, but is her ex best forgotten about?

The Verdict: Fun and fast paced. Bears all the elements needed for a rollicking beach read.

Published in The Irish Examiner on 18th February, 2017