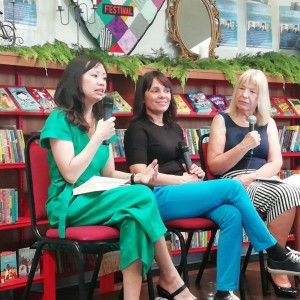 Brought up in a house without books, speaking Mandarin, Jing-Jing was never read to. She discovered books aged 7, at school.

“I loved Roald Dahl. I remember listening to audio tapes, as I read.”

During her MA, Jing-Jing wrote poetry.

“I had enough for a collection by the end of it,” she says.

She also wrote short stories and began work on a novel. Then she wrote a novella based on an old woman.

“It was published, but I couldn’t let go of the character. I kept on writing about her. I even dreamt about her. I had her character sketched out, but over the years I filled in all the little things.”

Who is Jing-Jing Lee?

Education: Chinese School in Singapore. National University of Singapore, Social science with business. “I was pressurised into that and quit halfway through.” Oxford University: MA in Creative Writing. “It was so positive. It gave me the confidence and freedom to think of myself as a writer.”

The Day Job: “Sometimes, I’m a creative writing instructor. I’ve taught at a university and at the Arts College in the Hague.”

In Another Life: “I’d be an ornithologist. I love watching birds, especially when we go hiking, but I’m not good at spotting them.”

Second Novel: “I have a draft, but I’ve been stuck since Dylan’s birth. I’m thinking about it, and letting it germinate on its own.”

It’s 1942, and Singapore is occupied by the Japanese. Wang Di, 17, is forced to act as a comfort woman in a military brothel. Ashamed, she keeps it secret for 60 years, but it haunts her.

Unable to talk about the war, she refuses to let her husband share his traumatic tale. But after his death, she longs to know the truth. Eventually, through 12-year-old Kevin, she learns it.

“It wasn’t until I’d written the novel that I realised part of it was based on my family history.”

The Verdict: Fascinating. Horrifying, powerful, and quite beautifully told.

Published in The Irish Examiner on 3rd August, 2019