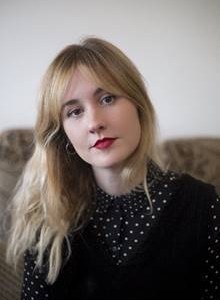 As a child, Jessica spent all her summers in Donegal, where her grandfather is from.

“Ireland is my second home,” she says.

Jessica is much travelled. She spent an Erasmus year in Santa Cruz, before taking an MA in Paris.

“After the MA I spent a year in London, working in bars and writing poetry. But I knew I wanted to write a novel.”

The chance came when her grandfather died, leaving his cottage empty.

“I moved to Donegal to concentrate on writing, thinking I might survive for two months. It’s remote and I can’t drive. I stayed for seven months and wrote the first draft of my novel.”

Afterwards she went to Berlin where she edited the book, before moving to London.

“I stayed a year, tutoring English. Then I moved to Barcelona.”

Jessica was approached by an agent around the time that she started the novel.

“An anthology is produced of the MA work, every two years. He liked my story.” He worked on the novel with her, and afterwards, she was offered a two-book deal.

Who is Jessica Andrews?

Education:  St Robert’s Comprehensive, in Sunderland. King’s College, London. English. MA in Creative writing, through the University of Kent, but taken in Paris.

The Day Job: English tutor. “And I help edit a literary magazine.”

In Another Life: “When I was a kid, I wanted to be an astronaut, but I’m not good at maths.”

Second Novel: “I know the shape of it, but there’s still a lot of writing to do.”

This lyrical, semi-autobiographical debut sees Lucy, overwhelmed by London, living in the wilds of Donegal, where she thinks back to her childhood, as she tries to piece together who she really is.

“I started off by experimenting with form and language, but it didn’t work. Then I just wrote it, and it flowed. I wanted it to be accessible.”

The Verdict: Mesmerising. Jessica is a brilliant, and original writer. She’s a name to watch.

Published in The Irish Examiner on 18th May