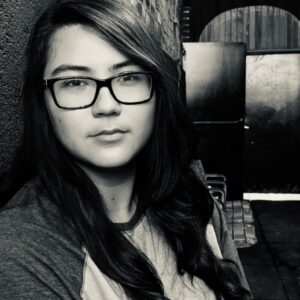 Jean’s mum immigrated from Korea to the US at 17, and while she spoke English pretty flawlessly, she found reading harder.“She bought me as many books as I wanted,” says Jean. “It brought her a lot of joy and pride to raise a daughter who read voraciously.”

In middle school, Jean wanted to be a rapper.

“But I’m dorky and have no rhythm.”

She wrote poems in the margins of her notebook, and in college took lines from the poems and expanded them into stories.

“I feel being a writer just kind of happens to you.”

The idea for the debut came during Jean’s last year in college. She and her roommates ordered a pizza, and recognizing the delivery guy, wondered what he made of their lives.

“I remembered my own delivery experiences, two years before, and how the opening of a door is a snapshot into someone’s life. That night I crafted the first line.

“After college, I moved to New York City and worked odd jobs as I studied Fiction in graduate school. Perhaps the happiest time of my life was the summer of 2018 when I would bartend all night, sleep a few hours, wake up, write until my next bartending shift, repeat.”

Who is Jean Kyoung Frazier?

The Day Job: “Alongside my fiction I’m a TV writer.”

In Another Life: “I’d love to be a painter and the quarterback for the Minnesota Vikings football team.”

Top Tip: “Write whatever you want; just be ready to own it.”

18, pregnant, confused, grieving, and in denial, ‘Pizza Girl’ becomes obsessed with Jenny, a mum and regular customer who seems equally at sea.

“I hope Pizza Girl makes people look at their eighteen-year-old selves with more generosity and softness.”

The Verdict: Tender yet tough; funny yet heartbreaking. A quite brilliant coming of age story. I loved it!

Published in The Irish Examiner on 26th September, 2020.