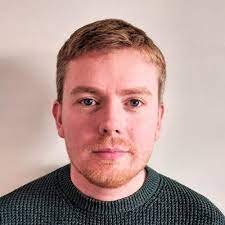 James’s parents had emigrated to England for work before his birth; they returned to Newry when James was six.

“It coincided with the ceasefire,” says James.

He became interested in writing through music and lyrics and then, at 15, through poetry.

After college he became a journalist moving to Liverpool, then Belfast, and finally in 2019, to London.

“I worked between journalism and copy writing as a freelance on short-term projects. I’m now settled with the Irish Post.”

A poet and essayist, James has been published in The Guardian, The Irish Times, New Stateman, Poetry Review and The Stinging Fly amongst others. He’s won an Erik Gregory Award and was shortlisted for the White Review’s Poet’s Prize, in 2021.

His editing debut came about through his frustration in the aftermath of Brexit.

“The news and comment left out how the border affected ordinary people. I thought I’d take a literary poetic view. I took the concept to New Island in the latter part of 2020.”

Who is James Conor Patterson?

Family: Fiancée Aimee Walsh. “We met when I was doing my Masters.”

The Day Job: Senior digital journalist on The Irish Post.

In Another Life: “Something visual; painting or photography.”

Top Tip: “Write what you know – but not necessarily from your own experience. Write what interests you, and never try to be trendy or to please someone else.”

The Debut: The New Frontier. Reflections from the Irish Border. New Island: €21.95

27 established writers share their reflections on the Irish border in pieces of memoir, of fiction and through poetry.

“My goal was to get people to recognise a different side of the Irish border than is portrayed in most media. It’s to return to it being about community, the beauty of the landscape, and individuality.”

The Verdict: A superb addition to the literary canon of Northern Ireland.