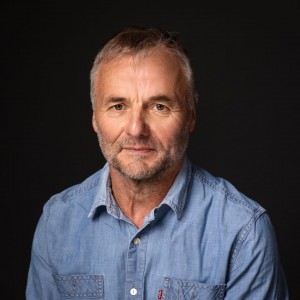 James’s mother died when he was 10, leaving him, and his seven siblings in the care of their father, a farm labourer, who treated them with benign neglect. He loved comics, but didn’t develop a love for literature until he attended university.

“I was terrified of having to repeat my leaving certificate – the whole idea was to get out! I finished up working for the Dublin Cooperation Housing Department, but after 15 months I got fed up.”

University beckoned. Unable to get a grant for his first year, James worked in England on a building site.

“After my degree I took a Dip Ed, but my teaching practice was in a primary school 6th class. I liked it, and took a conversion course.

“I taught in Tallaght until I retired, early, in 2014. I ended up as the Home School Liaison coordinator, working with the parents, sorting problems.”

During this time, he started a community drama group, wrote plays, and put them on upstairs at the Civic Theatre. His play, Stuck in the Mud, was picked for production, following a course he took in Kilkenny. He continues to write a play a year for a children’s theatre group.

“I started Dangerous Games for my MFA. But I changed the plot afterwards.”

Who is James Butler?

In Another Life: “I’d be a professional footballer.”

Second Novel: “It’s another YA. I’ve a first draft done.”

Top Tip:  “Join a writing group, for feedback and support.”

Living in a deprived area, Kevin is floundering. His Da is dead, his brother’s turned to crime, and his Uncle Davy is a loose cannon. Can he find a good role model?

“I wanted the book to have a moral compass. Having worked in that area, I wanted to write something authentic and respectful.”

The Verdict: A gritty, gripping tale that teenagers are sure to love.

Published in The Irish Examiner on 3rd May