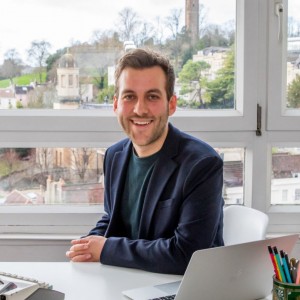 Mad about football, at 13, James decided to be a journalist. He reported for the local press; he founded a school newspaper and wrote a blog. At 17 at a random ECG screening, he was diagnosed with Wolff Parkinson White Syndrome – a condition linked to Sudden Adult Death.

“I had two operations; the second one cured me, but my life came to a temporary stop.”

He stopped interviewing sports personalities and blagged his way onto the red carpet.

“At university, I’d attend a lecture in the morning and interview George Clooney in the evening.”

After university James travelled the world, then, back in Bristol, he worked in hotel management, but hated it.

“After a weekend in Dublin, I formed a company giving walking tours of Bristol. It was flexible, I had time to write, and you hear such great stories”

One of them sparked the start of his debut. After a writing course with Curtis Brown, he found an agent, and a publisher. The Flip Side is being published in America, and 10 other countries.

Who is James Bailey?

The Day Job: “Working at my old school, in Alumnae, organising events with formal pupils.”

In Another Life: “It would have been very cool to be an architect. But I’m not sure I’d be any good at it.”

Favourite Writers: David Nichols and Nick Hornby. “I’m doing an event with David Nichols. The last time I met him was at his book signing.”

Top Tip: Believe in yourself, be persistent, and be prepared to accept rejection.

When Josh’s girlfriend turns down his proposal of marriage on the London Eye, he also loses his job and his flat. Deciding to run his life on the flip of a coin, he starts a year of crazy adventure. But will he get the girl of his dreams?

The Verdict: A well plotted romantic comedy to brighten the gloom of winter.