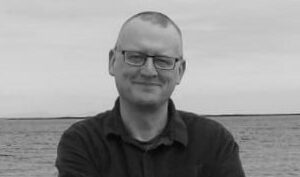 When Ian was 5 years old, and living in Derbyshire, he wrote a story, and his English teacher was so impressed that she bound it and made a cover.

“That’s when I decided I wanted to be a writer.”

After college, living back at home, Ian was always writing. He continued when he moved to Ireland in the nineties – living in Belfast, then in County Wicklow, before settling near Strangford, in rural Northern Ireland.

His first published work was a crime fiction series set in Dublin.

“I collaborated with my partner, using the pen name, Ingrid Black,” he says. “The series of three were published between 2003, and 2009.

“After that, I switched to writing for kids. I got the title Monster Hunting for Beginners ten years ago, and realised I had to come up with a story. I wrote a 5,000-word version and gradually expanded it.”

Who is Ian Mark?

Education:  Secondary school near Manchester; Liverpool University, Philosophy. “But after two years I realised it wasn’t for me.”

In Another Life: “I’d love to have been a 1940’s detective like Philip Marlowe.”

Second Novel: “The sequel will be published next September.”

Top Tip: Finish what you start. Don’t listen to the voice of self-doubt, and don’t worry about looking foolish

Jack was an ordinary boy – until his father disappeared one day, and an unknown aunt came to stay. Then, when Jack found an ogre in his garden trying to eat his aunt, he became a monster hunter’s apprentice. It took courage to fight monsters when all he had apart from his wits was a catapult and this book of instruction. But it was exciting too.

“I love it when a child who doesn’t normally read much, picks up this book and loves it. That makes me want to punch the air.”

The Verdict: A fun, funny and fast moving read that over 8’s are sure to love.

Published in the Irish Examiner on 1st January 2022.